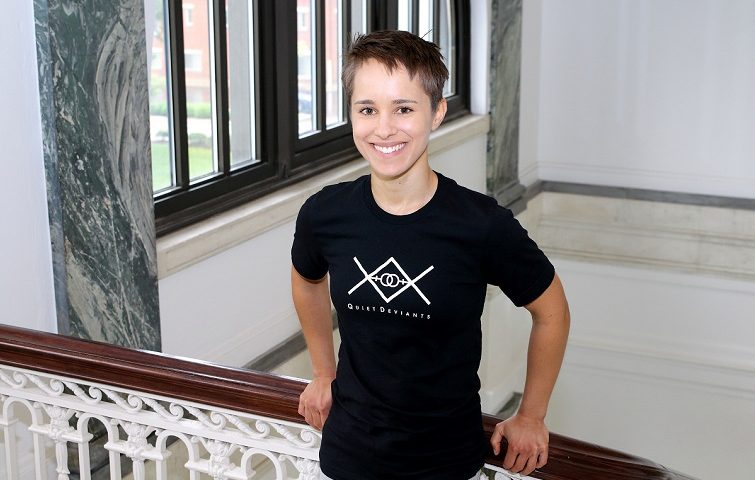 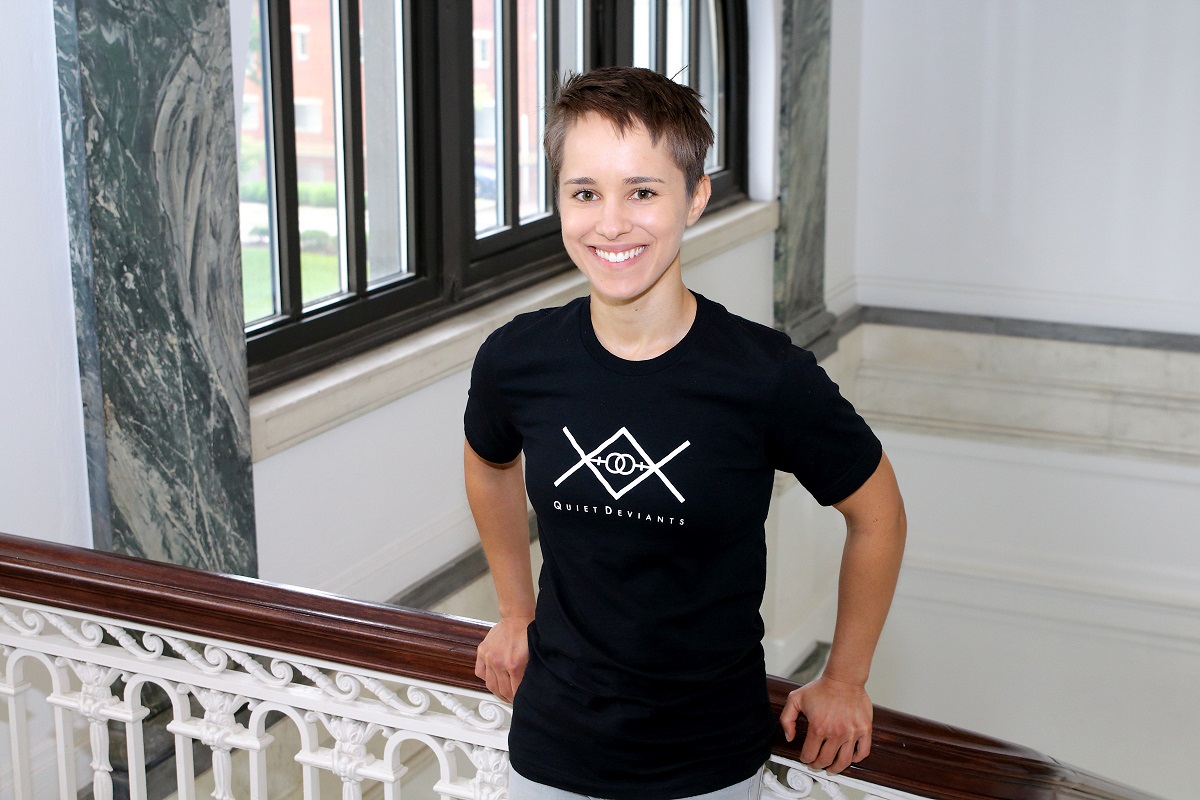 At 23 years old, Westerville native Perry Wallinger has launched her own clothing line, Quiet Deviants, in support of the LGBTQ community. Drawing inspiration from her own journey to pride, Wallinger says, “I didn’t want to wear some of the louder clothing that’s available now, so I tried to come up with something that spoke to me. I knew there was no way I was the only one that felt that way, and I wanted to share it with others.” Wallinger, who has a degree in exercise science but no formal background in fashion design or branding, says she was, “born in a golden age for entrepreneurship and opportunity.” In addition to the online store, Wallinger will bring Quiet Deviants to the Columbus Pride Festival along with several others across Ohio.

Are you originally from Columbus? What is it about this city that endears you to it the most? I was born and raised in Westerville—I’ve actually lived in the same house my whole life. I love that Columbus has a very Midwestern exterior of nice people, large corporations, and easy access to farmland. However, if you take a second to peel back that layer, it really is a pulsing community of a variety of vibrant cultures and communities. I’m continually surprised at the breadth of high quality artistic and entrepreneurial people there are in Columbus. I think that’s what people miss—yes, it’s starting to be known that Columbus has more art and culture than people give it credit for, but the people producing are of a high caliber as well.

Give us a snapshot of your career path: While I was at Ohio State, I had strength and conditioning internships that led me to become a personal trainer. I got exposed to gyms/companies like The Spot Athletics and EliteFTS that place a real emphasis on constantly learning and pushing yourself to get better. After graduation, I was an inside pharmaceutical sales rep at Cardinal Health for a year, which was a great experience in learning business processes and selling. Since then, I’ve been a part of small businesses and started my own company, Quiet Deviants.

Tell us more about Quiet Deviants. What should we know? Quiet Deviants is an LGBTQ clothing brand based on subtle, intentional designs that speak to the LGBTQ community. Coming to terms with my sexuality has been a struggle for me, so when I was finally comfortable with expressing my pride, I couldn’t find any clothing that I felt comfortable wearing. I didn’t want to wear some of the louder clothing that’s available now, so I tried to come up with something that spoke to me. I knew there was no way I was the only one that felt that way, and I wanted to share it with others. Right now, Quiet Deviants consists of The Foundation Collection, which is a collection of T shirts and hoodies with a G, L, and B + Q design on them. I’m hoping to add a transgender /gender nonconforming design next, and then have limited run collections in the future.

What’s new and exciting with Quiet Deviants? The online store officially launched at the end of May, so that’s a pretty literal answer to new and exciting! This summer is going to be big for Quiet Deviants—I’m going to be at Columbus Community Pride, Cincinnati Pride, and Yellow Springs Pride. On July 13, I’ll be at Moonlight Market. In August, I’ll be at Akron Pride on the 24th, and am hoping to be at Mansfield and Toledo Pride earlier that month.

What gets you up in the morning? And what gets you through the workweek? Sincerely believing that by pure luck, I was born in a golden age for entrepreneurship and opportunity. I want to take advantage of that while I’m young with few obligations. A growing concern of mine is that when I’m older, I’ll look back and regret that I didn’t push myself hard enough for long enough to see any of my dreams come closer to reality. I hate losing a lot more than I like winning, and that attitude is typically what keeps me going.

What advice or mentors have helped guide you along the way? My parents. I sincerely, truly believe I have the best mom and dad ever. The world would be an incredible place if everyone had parents like mine. Other than those two, and without including enough details to put everyone to sleep, my mentors have included Alycia Israel at Ohio State, Karl Koon (the Director of Development at Team Buckeye/Pelotonia), Robert Braun, and Tim and Jenny Rollins.

Explain some of your work-life balance challenges. How do you achieve success in spite of the hustle and bustle? I don’t really consider myself to have achieved success yet, so I’ll answer this question a different way. I started a clothing brand with zero design, fashion, or branding background, so I’d say by biggest obstacle right now is figuring out the best next steps to take to grow Quiet Deviants that is both true to the brand and fiscally responsible. I’m trying to keep my mouth shut and eyes and ears open in order to learn from those around me as much as possible. Hopefully, I’ll find a mentor who is in the fashion/streetwear/retail space who can provide industry-specific advice.

When you were a kid, what did you say you wanted to be when you grew up? The first female major league baseball player. Unfortunately, the Yankees never called.

What might someone be surprised to know about you? I can eat a salad—with a fork!—while driving.

If you could have a superpower, what would it be? Transfiguration because I think it combines most superpowers in to one.

What books/podcasts are you reading/listening to right now? I just discovered the Nancy podcast, so I’ve been catching up on that. I also like What’s the Tee? With RuPaul and Michelle Visage, and The Read. As far as books, I just got Naturally Tan by Tan France, so I’m looking forward to reading that.

What would your autobiography be called? Since I’m 5’1 ½, probably I Can Reach the Shelf If I Try Hard Enough.

What are among the top places you’d recommend to someone who is new to or visiting Columbus? It would completely depend on their interests. Some of my favorite places are Uptown Westerville, Huntington Park, Southpaw Boxing Club in Hilliard, The Happy Greek, and Hoover Dam.

Which organization(s) are you involved with around the community? I’ve been involved in planning for Columbus Community Pride, and am hoping to start volunteering at Kaleidoscope Youth Center later this summer. I’m also involved in an LGBTQ non profit that is still developing.

What’s the most exciting thing about Columbus right now? Watching the growth of Columbus within the past 5-10 years has been pretty interesting, to say the least. I feel like there’s always some big announcement right around the corner in Columbus, whether it’s a new round of venture capital for a start-up, an exciting opportunity for homegrown talent like Nina West, or a new business/restaurant. It seems that Columbus is truly taking a big step up.

What are three things you think Columbus needs? I actually think if you look hard enough, Columbus has a version of practically anything you can think of. But I’d say truly affordable housing for young people and those who are being pushed out by new development, more rooftop places like Lincoln Social, and a statue of the greatest shortstop ever, Derek Jeter.

If someone were to ask you what the “pulse” of Columbus is, what would you tell them? A combination of old school Midwest hard work and imagination.