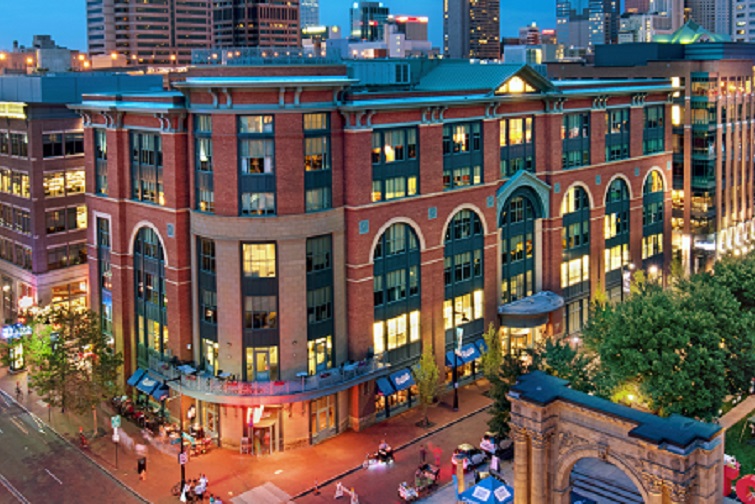 Situated in the northern part of downtown – and built on the grounds of the former Ohio Penitentiary – the district boasts Nationwide Arena, home of the NHL’s Columbus Blue Jackets and a thriving concert and event venue. You can also catch a baseball game at Huntington Park, home of our Columbus Clippers, the triple-A affiliate of the Cleveland Indians, where they proudly offer “Dime-A-Dog” night on rare, but delightful occasions, where park goers can get a hot dog for a dime!

The Arena District is vibing all year long with a killer music and live event schedule. Consistently voted the city’s top live music venue, Express Live!, next to Huntington Park, attracts major concerts featuring some of the biggest names in music and large-scale events, including Summer Beerfest and CD102.5 Day. The venue serves 2,200 patrons indoors or 5,200 in the outdoor amphitheater.

McFerson Commons (aka Arch Park) is the site of Jazz & Rib Fest, the starting line for Pelotonia, and the finish line for the Nationwide Children’s Hospital Columbus Marathon. This is also one of the best vantage points to catch Red, White & Boom!, the largest fireworks display in Ohio, welcoming 400,000 spectators.

Major employers headquartered in the Arena District include Nationwide Insurance, AEP, and Columbia Gas of Ohio.

And if you want to go exploring just outside the Arena District lines, adjacent to all this fun is the Park Street District, consisting of trendy bars and restaurants that are full of energy on the weekends and play host to lively events and pub crawls.