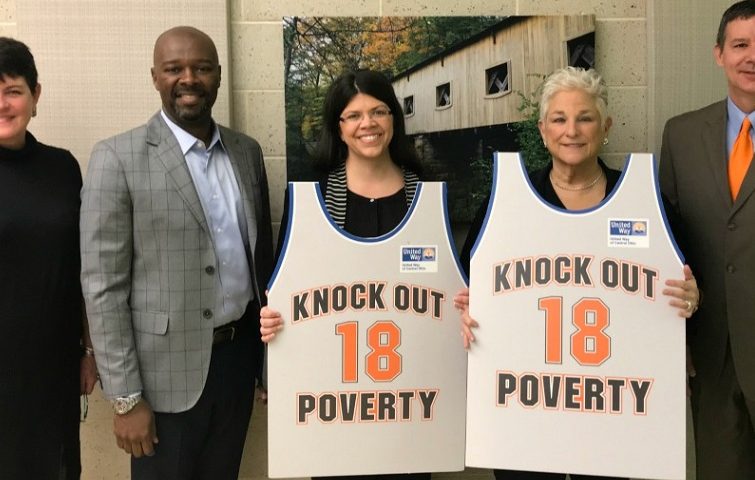 Central Ohio continues to have high poverty rates despite record low unemployment rates, according to Elissa Francis, relationship manager of United Way Central Ohio. “Many hardworking families are not benefiting from the strong economy,” she says. Many of them are living in poverty, a very complex and extremely difficult situation that can create a variety of personal and professional issues in their lives. “In fact, one-third of all Franklin County residents cannot meet their basic needs.”

That’s why United Way is hosting its second annual March Madness-themed fundraising event called, “Knock Out Poverty,” sponsored by Columbia Gas, which began Feb. 25 and will last through March 22 with 70 nonprofits competing in four brackets.

The premise is simple: Fans go to knockoutpoverty.org now through March 10 and donate to their favorite nonprofit organization supported by the United Way. Fans can return on March 11 to see who has advanced in the rounds. Fans can continue to donate to push their nonprofit to the end of the competition through March 22.

“It is a digital community fundraising campaign that utilizes peer-to-peer engagement to interact with a new online community of supporters via friendly competition and awareness building of United Way of Central Ohio’s nonprofit partners.” says Francis.

Funded partners are divided into divisions with similar sized organizations and will compete to raise money and engage new supporters during the two-week tournament. Each organization will receive 100 percent of the donations they raise and potentially earn a portion of the $200,000 prize pool.

On Friday, March 15 at 5:01 p.m. through Friday, March 22, all remaining agencies return to $0 raised and start again for the final prize. No matter the outcome of the final round, agencies will keep their earnings from week one and anything further they raise in week two.

“United Way of Central Ohio is focused on fighting poverty by investing in the most effective partners that get results. This network of more than 70 local partners provide opportunities in four critical areas including basic needs, good jobs, strong neighborhoods and student success.” says Francis.

Jane Grote Abell of Donatos is the event’s 2019 Honorary Chair. Donatos is hosting a digital promotion for the tournament on March 13 called “Dough Day.” If you order online from Donatos using promo code KOP, 20 percent of sales will benefit the “Knock Out Poverty” prize pool.

To learn more about “Knock Out Poverty!” or to make a donation, head to their website.