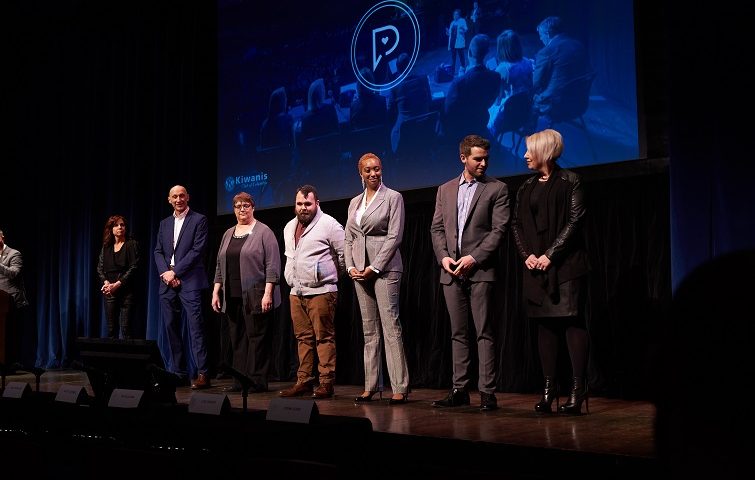 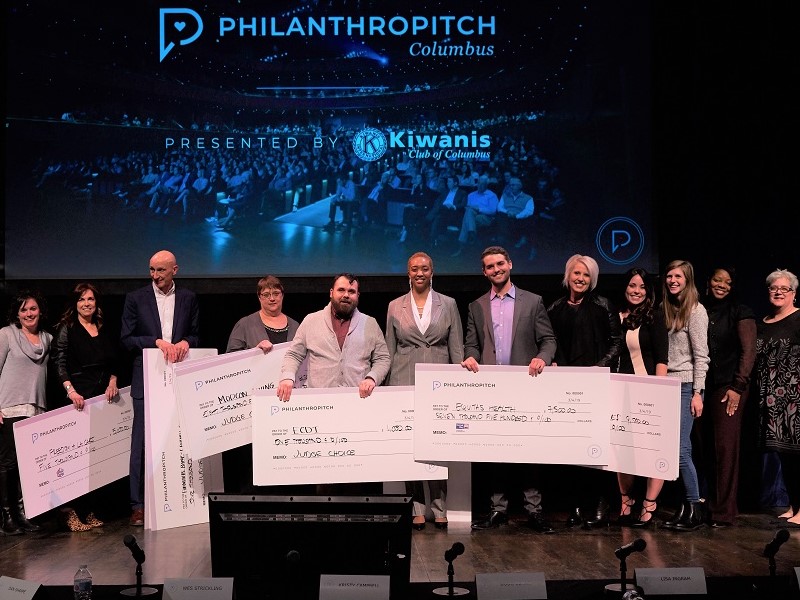 Seven local nonprofits earned a seat at the pitch table and were invited to present on stage at Speaker Jo Ann Davidson Theatre in downtown Columbus earlier this year to raise awareness and money—to the tune of $104,475—for special projects in their organizations not covered through traditional grant money. It was the first-ever Columbus Philanthropitch and it was a big success.

Philanthropitch is a high-energy, intense race for area nonprofits to compete for a donation. In this inaugural competition, nonprofits ECDI, Equitas Health, Freedom a la Cart, Furniture Bank of Central Ohio, ModCon Living, ROX, and the YMCA were pushed to showcase their organizations in a unique way while building pitch-giving skills and awareness for their cause. Founded in 2013 in Austin, Texas, Philanthropitch’s debut in Columbus was a bonafide success for the nonprofits and for the event’s numerous local sponsors.

“We were looking to connect the traditional nonprofit community with the startup community in Columbus,” says Wes Strickling, a member of the Charity Start-Up Competition Funding Committee of Kiwanis, who put in several hours to make Philanthropitch a reality. “We thought this was an amazing opportunity to connect the two and fund some great nonprofits in a fun and innovative way.”

More than 400 attendees purchased tickets in support of Philanthropitch, which was presented by Kiwanis Club of Columbus and co-hosted by SocialVentures.

“Internally our club members were able to see a different way to make an impact by funding nonprofits in a pitch style event,” says Strickling of Kiwanis, an organization dedicated to serving youth and networking through leadership roles within the club. The club played a crucial role in bringing Philanthropitch to Columbus. “Externally, our club was able to show the community that a traditional nonprofit service organization can make an impact in a dynamic way.”

HOW IT WORKS
Nonprofits from around Central Ohio were invited to submit their proposals to Philantropitch last fall. From the more than 50 groups who answered the call, a group of judges narrowed it down to seven finalists – seven organizations that would have the opportunity to publicly present their concept and to vie for the more than $100,000 of available funds. The seven nonprofits were required to step onto the Philanthropitch stage to pitch their organization to a panel of judges and an audience of hundreds. They weren’t awarded a standard set of first, second, or third-place prizes. Instead, each judge donated their own money and decided how it should be distributed among the finalists. The nonprofits also received cash awards from corporate donors (ranging from $5,000 – $25,000) and audience awards via text message donations, as well as receiving top-notch pitch training and awareness among new fans in attendance.

SocialVentures, an organization dedicated to empowering businesses to eliminate the social and economic divide in Central Ohio, was inspired by the opportunity to help smaller nonprofits in the Central Ohio region.

Social Ventures also worked countless hours with Philanthropitch to make its Columbus opener a success. The push started in 2017, when Proctor invited Dan Graham, head of Notley Ventures and co-founder of Philanthropitch, to be the keynote speaker at their 2017 Nonprofit Sustainability Showcase.

“Since then we have spent countless hours in meetings and conference calls with Philanthropitch staff to assist them in choosing venues, recruiting judges, reaching out to nonprofits, participating in the selection process, and coaching the finalists on their pitches,” says Proctor.

Both Kiwanis and SocialVentures look forward to working with Philanthropitch again following the smashing success of the event.

“As we had hoped, Philanthropitch is a concept that attracted more people and more businesses to support social enterprise than has ever occurred in Central Ohio,” says Proctor.“ We look for future events to expand the pool of medium-sized businesses that see philanthropy and Philanthropitch as a meaningful way to engage their employees and their companies in the civic life and welfare of Columbus.”

ABOUT THE NONPROFIT FINALISTS

ROX
ROX is all about making the world better for girls by empowering them to make stronger choices for themselves. Their focus for girls is confidence and control of their own life. This all happens through the work of training and licensing school professionals (counselors, social workers, and educators) to deliver a 20-week empowerment program to girls, conduct large national research, and provide professional development to share data for ROX and help adults in influential positions to create powerful, confident young women.

“We love seeing our supporters share ROX in ways meaningful to them, whether that’s introducing my book, ‘Girls Without Limits: Helping Girls Achieve Healthy Relationships, Academic Success, and Interpersonal Strength’ to their book club, sharing ‘The Girls’ Index’ with their community leaders, workplace or affinity group, or by donating to ROX or attending a fundraiser event,” says Lisa Hinkelman, Founder and Executive Director of ROX. “The launch of The ROX Research & Training Institute will also offer an opportunity for parents, mentors, coaches and advocates to receive research-based education and tools that can support their relationships and work with girls and women.”

Through working with Philanthropitch, ROX has gained more attention to their program right here in Columbus, their original goal since the beginning. They’ve also obtained opportunities such as a place in the Draper Richards Kaplan Foundation portfolio in 2017.

“I remain so grateful Philanthropitch included opportunities for all selected organizations to meet with leaders that provided fast-pitch coaching and ongoing support through our entire process.”

MODCON LIVING
Modcon Living, formerly known as Rebuilding Together Central Ohio, is dedicated to providing affordable home care and home modification services while being a reliable service for valuable, aging homeowners. They believe that everyone deserves the choice to age in place with dignity and independence.

Since being established in 1991, Modcon has provided year-round emergency home repair and the Tool Library memberships (DIY home repairs) throughout Central Ohio.

Home repair assistance has been provided to nearly 1,800 homeowners, 24,500 volunteers have served more than 270,000 hours, and home repairs were valued at a total of $5.5 million since Modcon’s inception.

“We believe that true social change and empowerment happens when we invest in the workforce development, life skills training and job placement assistance needed to help survivors become personally and financially self-sufficient,” says Paula Haines, Executive Director of the program that provides catering and other food services to fund their initiatives.

Through their work with Philanthropitch, Freedom has secured new catering orders from people who support their work and over $18,000 from new corporate partners and donors.

“We’re continuing to pursue funding and investment opportunities introduced as the result of Philanthropitch,” Haines says.

Donating, volunteering, and ordering from Freedom’s catering service is a great way to help these human trafficking survivors through their journey.

EQUITAS HEALTH
The mission of Equitas Health is good health for those at risk of or infected by HIV, for the lesbian, gay, bisexual, transgender, and queer/questioning (LGBTQ) community, and for those seeking a welcoming healthcare home. With values such as cultural humility, comprehensive care, inclusiveness, acceptance & respect, relationships, forward thinking, and nobility of purpose, Equitas Health welcomes everyone in need with open arms.

Equitas Health has 17 offices in 11 different cities and serves more than 67,000 people throughout Ohio, Kentucky, and West Virginia each year. With diverse healthcare and a social service delivery center, 100 percent of profits are reinvested back into the organization’s programs and services.

YMCA OF CENTRAL OHIO
From infant/toddler education to family fun activities, YMCA of Central Ohio commits to nurturing the potential of kids, promoting healthy living, and fostering a sense of social responsibility.

YMCA doesn’t just have programs and activities for children; adults can participate, too. YMCA offers a variety of programs for adults including fitness classes and community wellness.

YMCA has five pillars that they work on every day: Childhood development (for the younger members of the community to achieve growth and progression), Youth and Teen development (giving support to older youth and teens to fulfill their potential), Healthy Communities ( working on mental, social, and emotional health), Housing for Homelessness (preventing and reducing homelessness), and Social Entrepreneurship (unleashing the power of business for social good).

Employees and volunteers work side-by-side with their neighbors to make sure that everyone, regardless of age, income or background, has the opportunity to learn, grow and thrive.

“The best support we receive are donations of gently used furniture,” says Steve Votaw, President of The Furniture Bank. “We are in need of beds, dressers, kitchen tables and chairs, stuffed sofas, and appliances.”

Being one of the largest furniture banks in the country, and earning multiple awards for their program, the Furniture Bank of Central Ohio is helping families in need every day to build a stronger family unit, improve quality of life, and build a better community.

ECDI
Supporting inclusive entrepreneurship to help foster a more generous and successful Ohio, ECDI has been helping low-income communities start their own small businesses for more than 15 years. According to their website, the organization disbursed a total of over $50 million through more than 2,100 loans, and created and retained over 8,000 jobs.

“It was a lot of fun working with the Philanthropitch team and I learned a lot about other organizations around the city,” says Terry Traster, Food Fort Director of ECDI. “ECDI definitely received more attention after the pitch.”

The Results
At the end of the night, all the finalists went home with impact dollars. The grand total raised for Columbus causes as a result of Philanthropitch was a whopping $104,475!