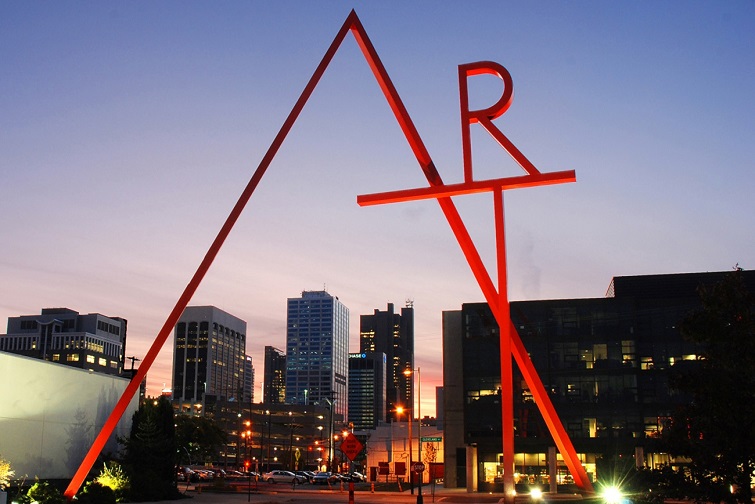 Part of what make Columbus such a culturally rich destination is the thriving arts scene it boasts. Home to hundreds of galleries & studios, special events, and one of the best art schools in the country, it’s easy to find inspiration around every corner. Here are a few of our favorite public art pieces from around the city; pieces that inspire, awe, and celebrate our creative Columbus. 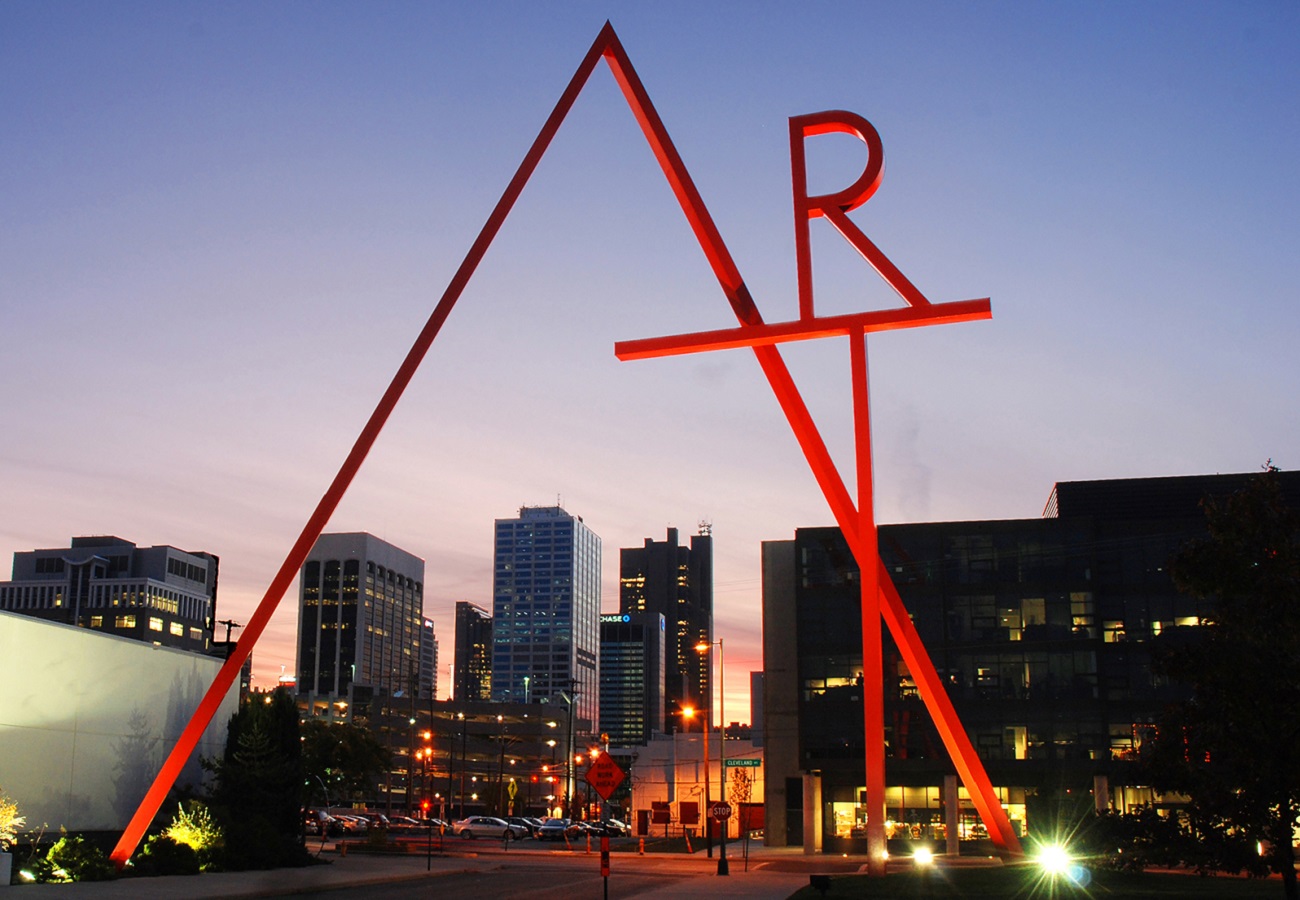 1. CCAD ART Sculpture
Towering 100 feet tall over the CCAD campus is the school’s beloved ART sculpture, standing proud since 2001. The sleek, 24,000lb. cherry-red installation, inspired by the 1950s diner aesthetic, was the brain-child of Ric Petry, now Director of Graduate Studies at the art school. Petry had originally joked about the school needing a giant ART sign, an idea then President Denny Griffith actually really liked. Thus this infamous aspect of the Downtown skyline was born, serving “as a beacon for arts in Columbus and beyond.” 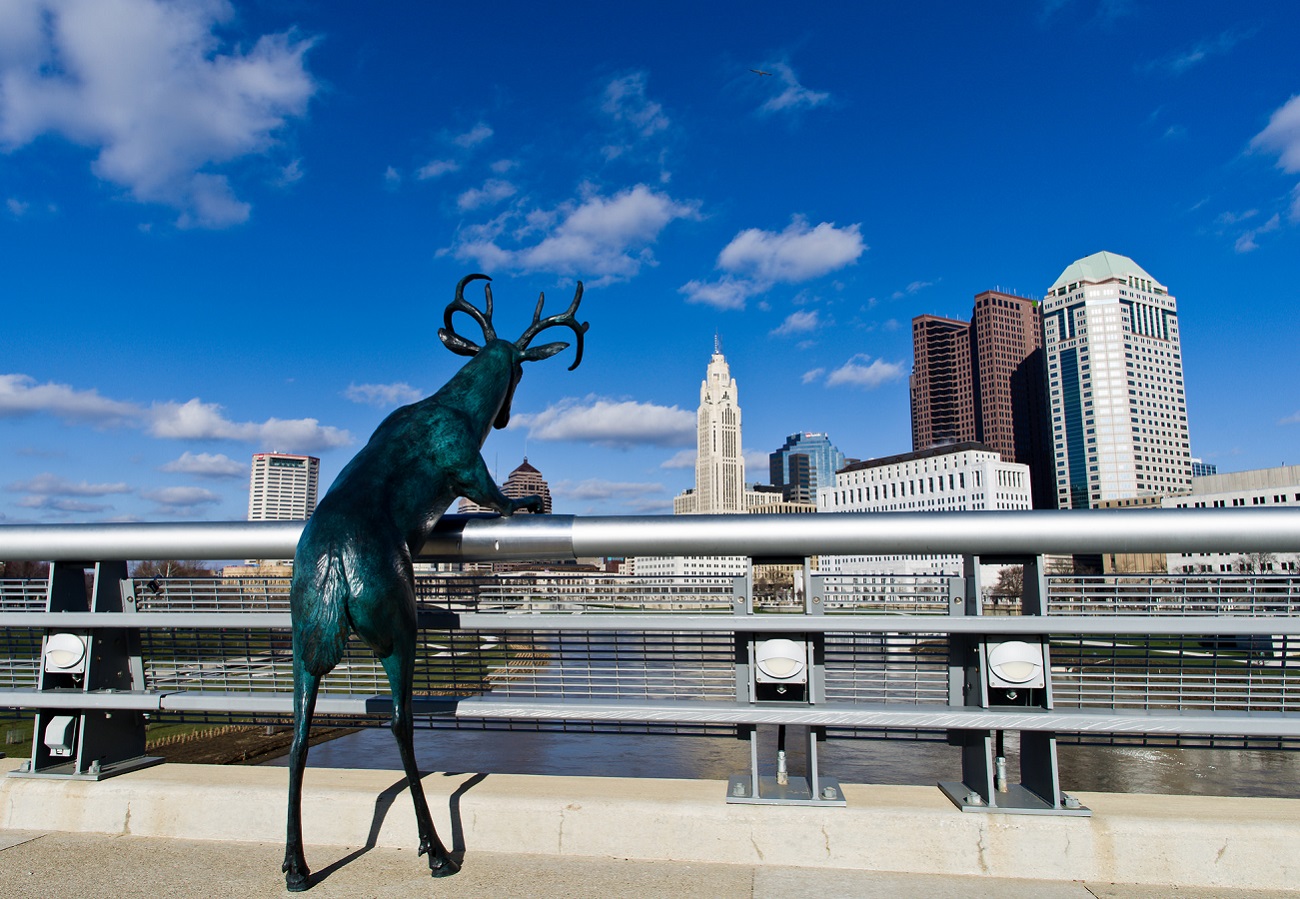 2. Scioto Mile Deer
Fun fact: the “Scioto River” actually got its name from the Shawnee Indian word for “hairy water!” Santa Fe country musician and artist Terry Allen got inspiration from this fact for his deer sculptures along the Scioto Mile. The three bronze statues appear as relaxed and as human-like as their park patron counterparts; lounging in the grass and gazing at the scenic skyline. The Downtown deer get a front-row view at some of the city’s biggest events and festivals year-round, and are a favorite for photo-ops along the Mile. 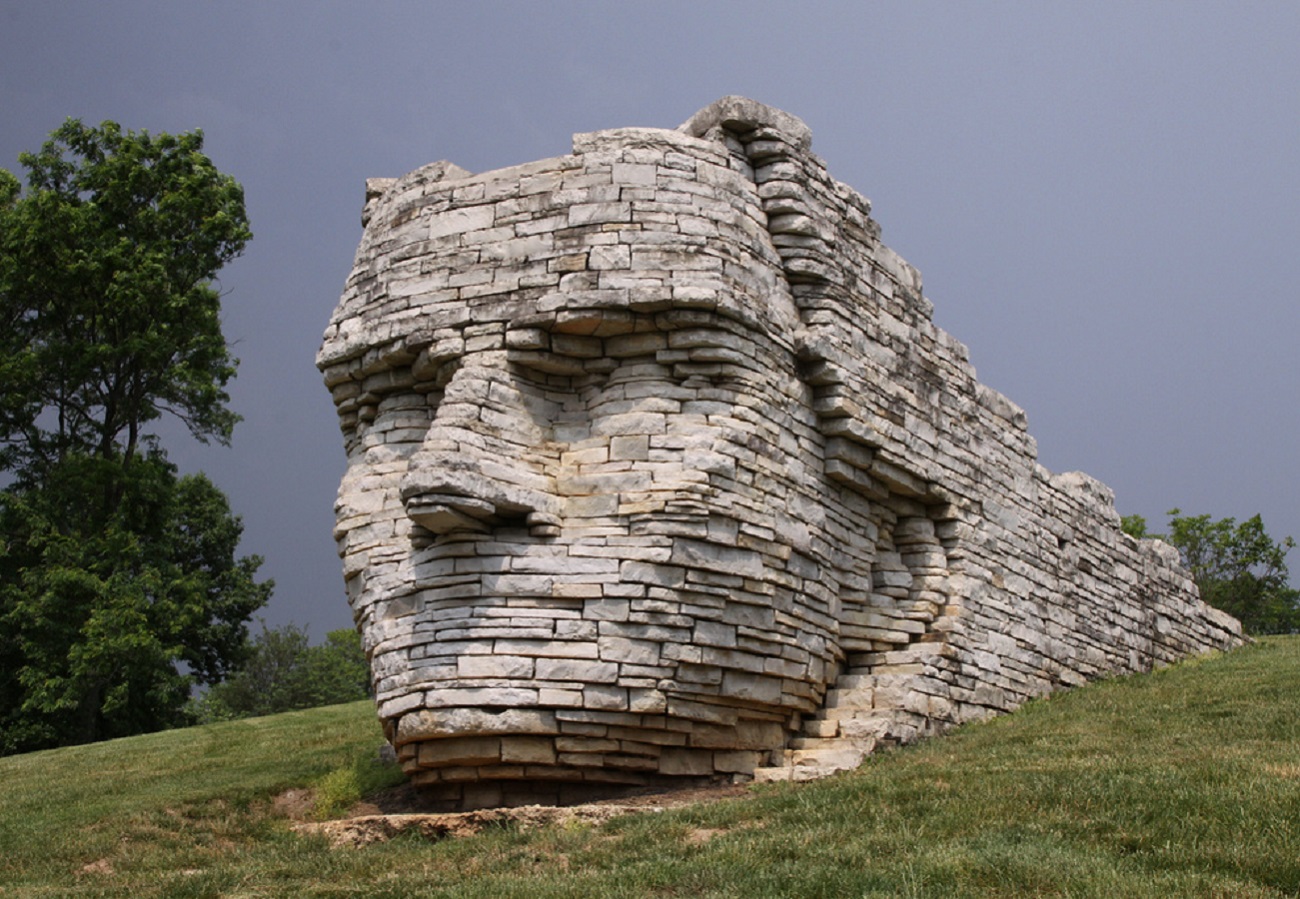 3. Chief Leatherlips Monument
Nestled within Scioto Park along the river in Dublin is a giant, Sphinx-like head emerging from the grassy hillside. The Chief Leatherlips Monument is the city of Dublin’s first true public art piece, having been commissioned by the area’s Art Council in 1988. Crafted out of native limestone slabs by Boston artist Ralph Helmick, the 12-foot tall piece memorializes the Wyandot Native American leader, who was known for being especially friendly to settlers. 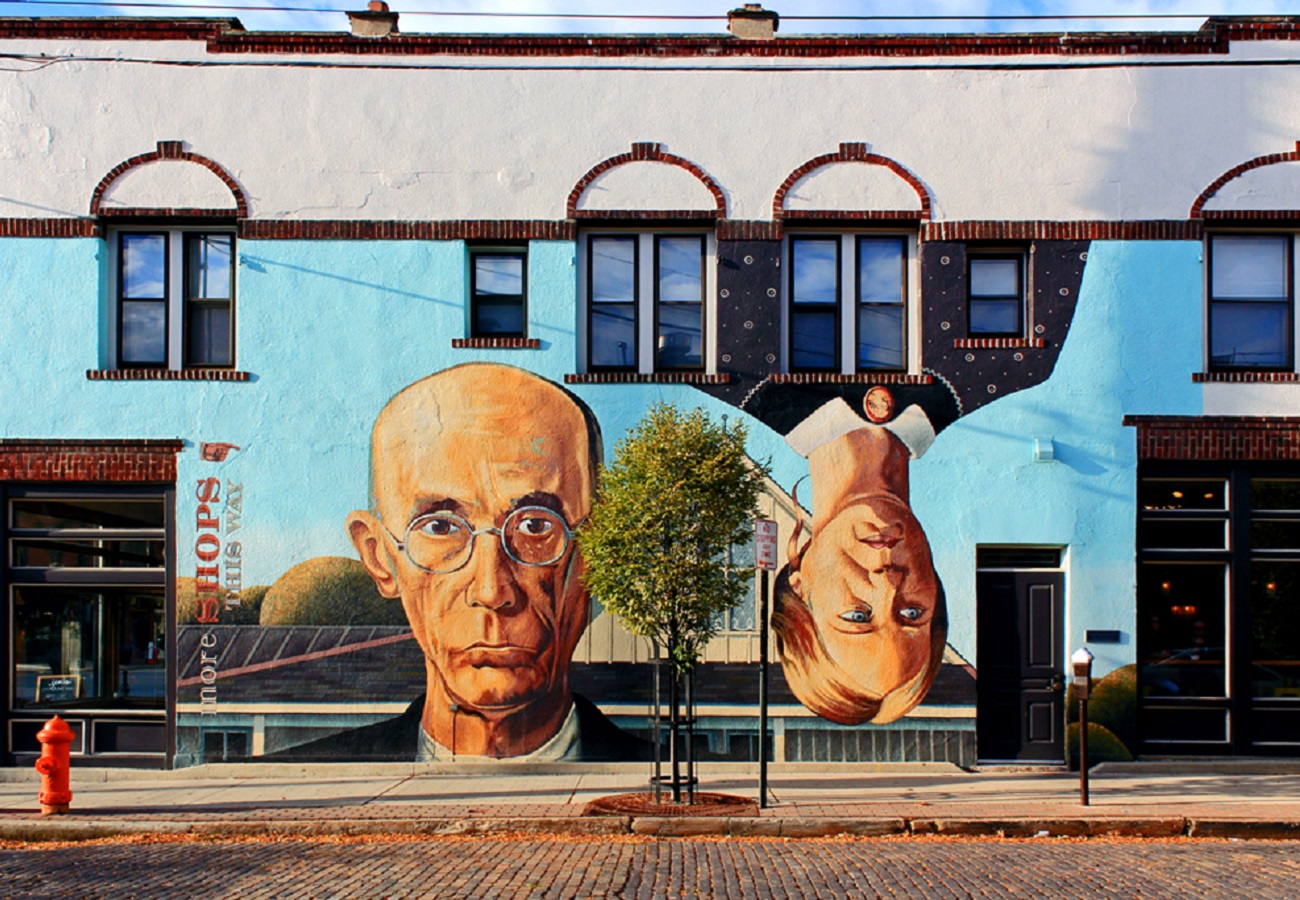 4. Short North Murals
The always-hip Short North is known around town for its thriving creative scene, home to a plethora of art galleries and events like the monthly Gallery Hop. The Short North also features many public art pieces, including temporary murals that come and go throughout the years and several permanent ones, like our personal favorites, larger-than-life twists on the “Mona Lisa” and “American Gothic.” 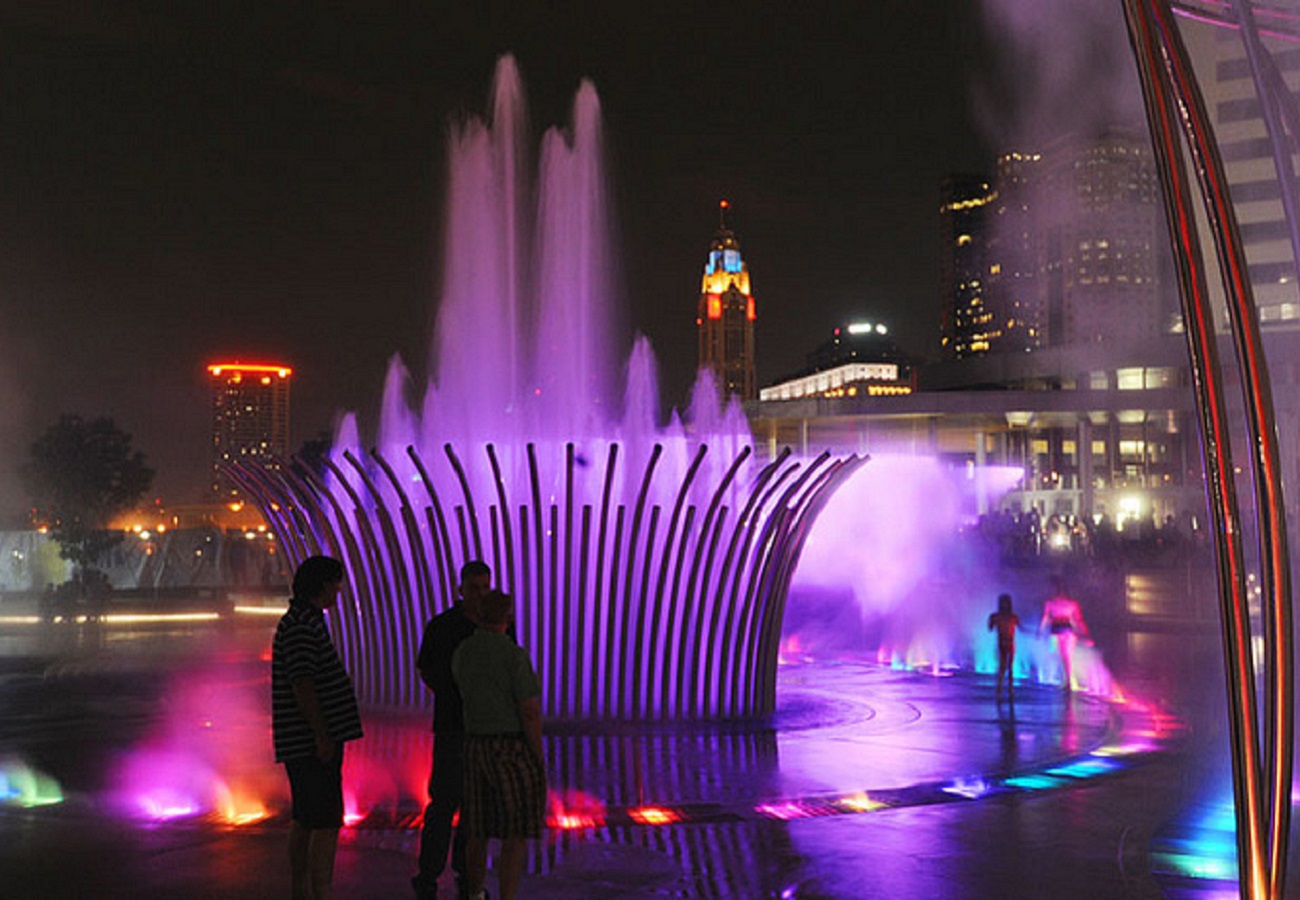 5. Scioto Mile Fountains
Serving as both an art installation and an interactive play-place, the fountains in Bicentennial Park are another not-to-miss attraction along the Scioto Mile. The fountains, which take up 15,000 square feet of the park, combine sleek, modern sculpture with wild water effects, featuring five giant fog and sprinkle-releasing steel halo structures and thousands of ground-up water jets. It offers a way to cool off during the day and a visual wonder of ambient lighting effects at night. 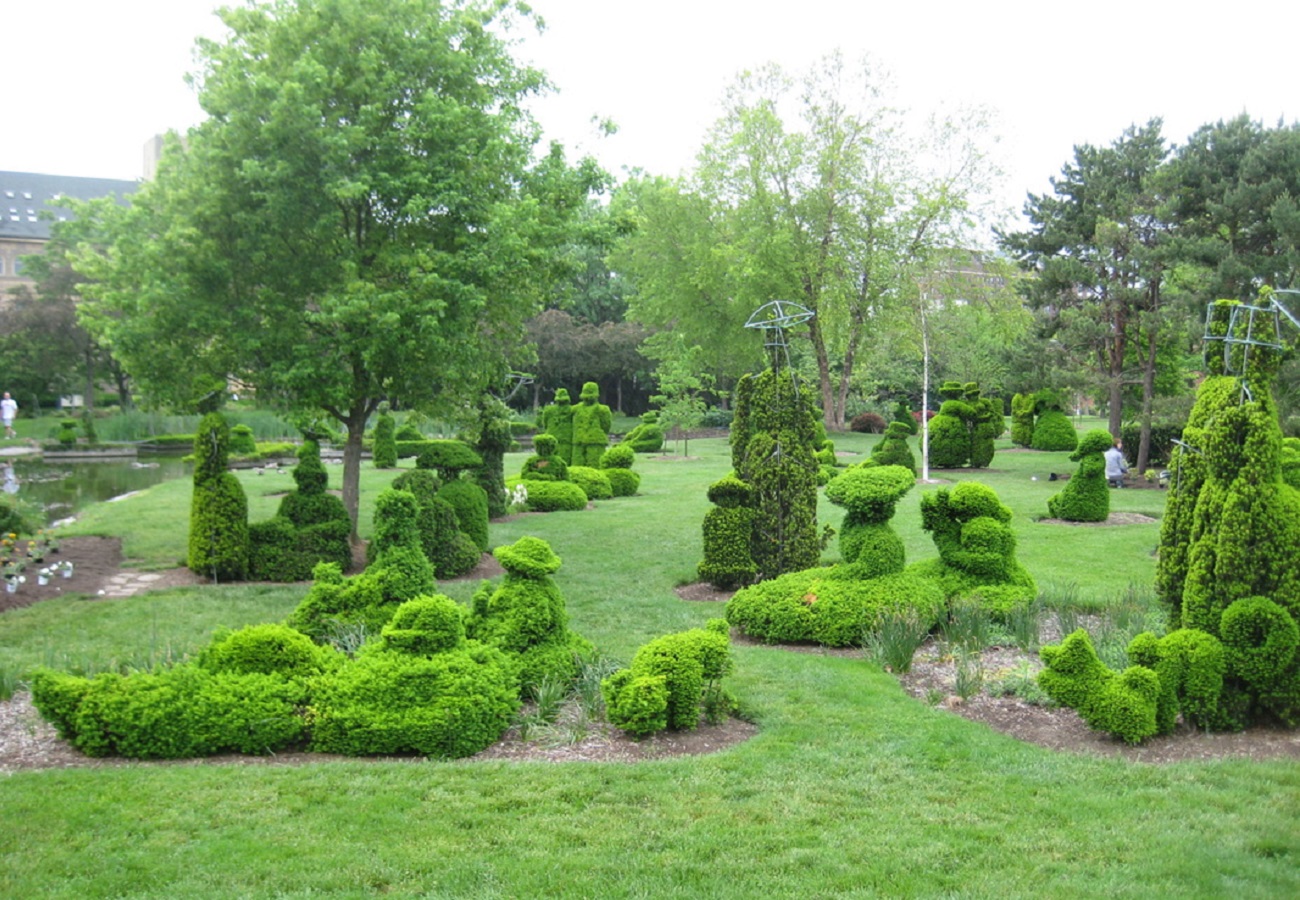 6. Topiary Park
Strolling through Downtown’s Topiary Park is like stepping into a classic landscape painting-or a scene from “Edward Scissorhands.” The lush green space is home to a series of giant yew topiaries meant to interpret Georges Seurat’s iconic “A Sunday Afternoon on the Isle of Grand Jatte.” The famous piece is brought to life with 54 12-foot tall human figures, eight boats, and even several animals, which all bring both wonder and whimsy to the space. 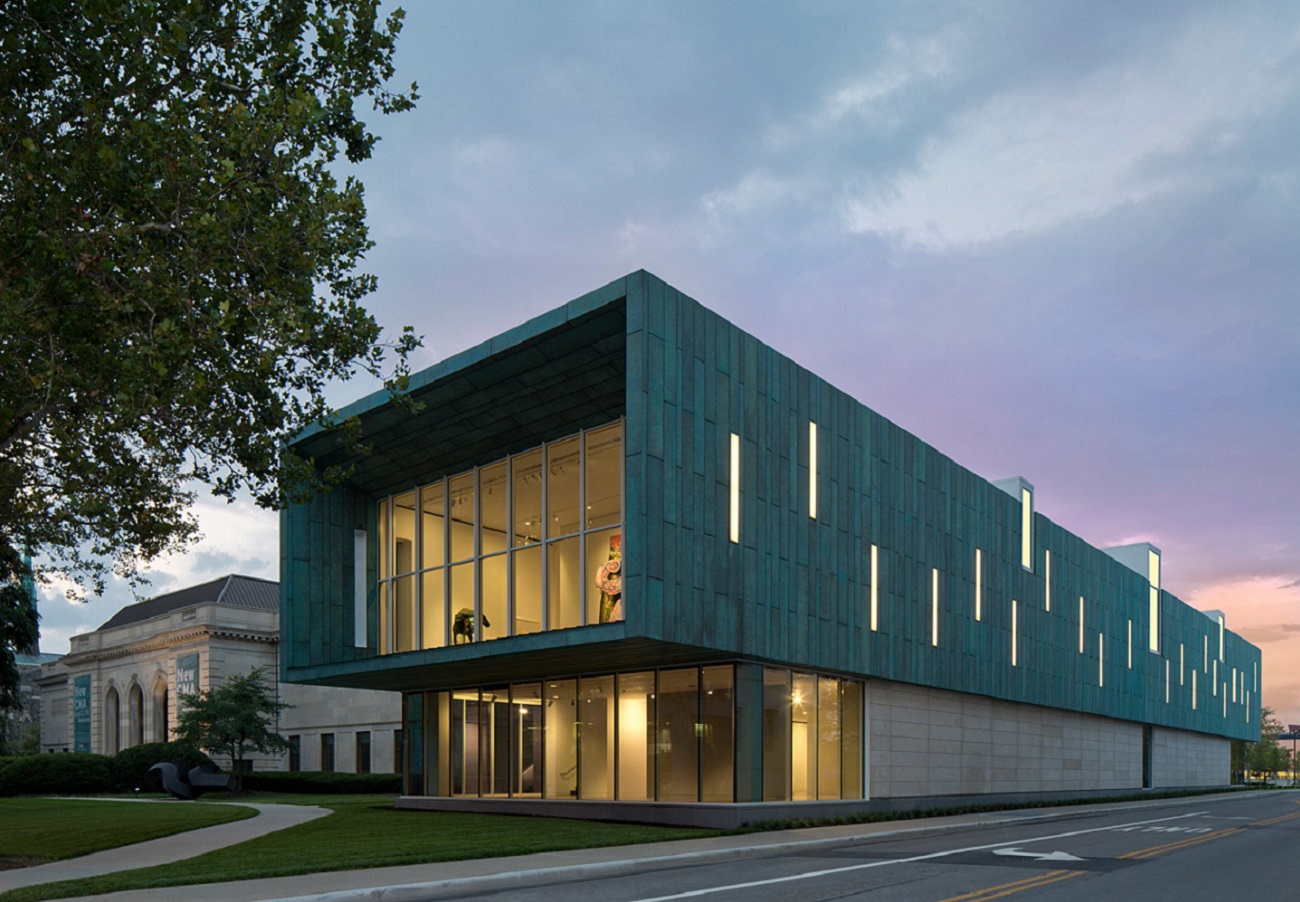 7. Columbus Museum of Art
The fabulous Columbus Museum of Art makes our list for two reasons; one being the fact that the building is a fascinating work of art in itself, utilizing bold color, tons of glass, modern lines and shapes, and mind-bending architecture in both its outdoor and indoor appearance. The museum also boasts a gigantic Pop Art sculpture just outside its entrance which can be viewed and explored without admission to the rest of the attraction. 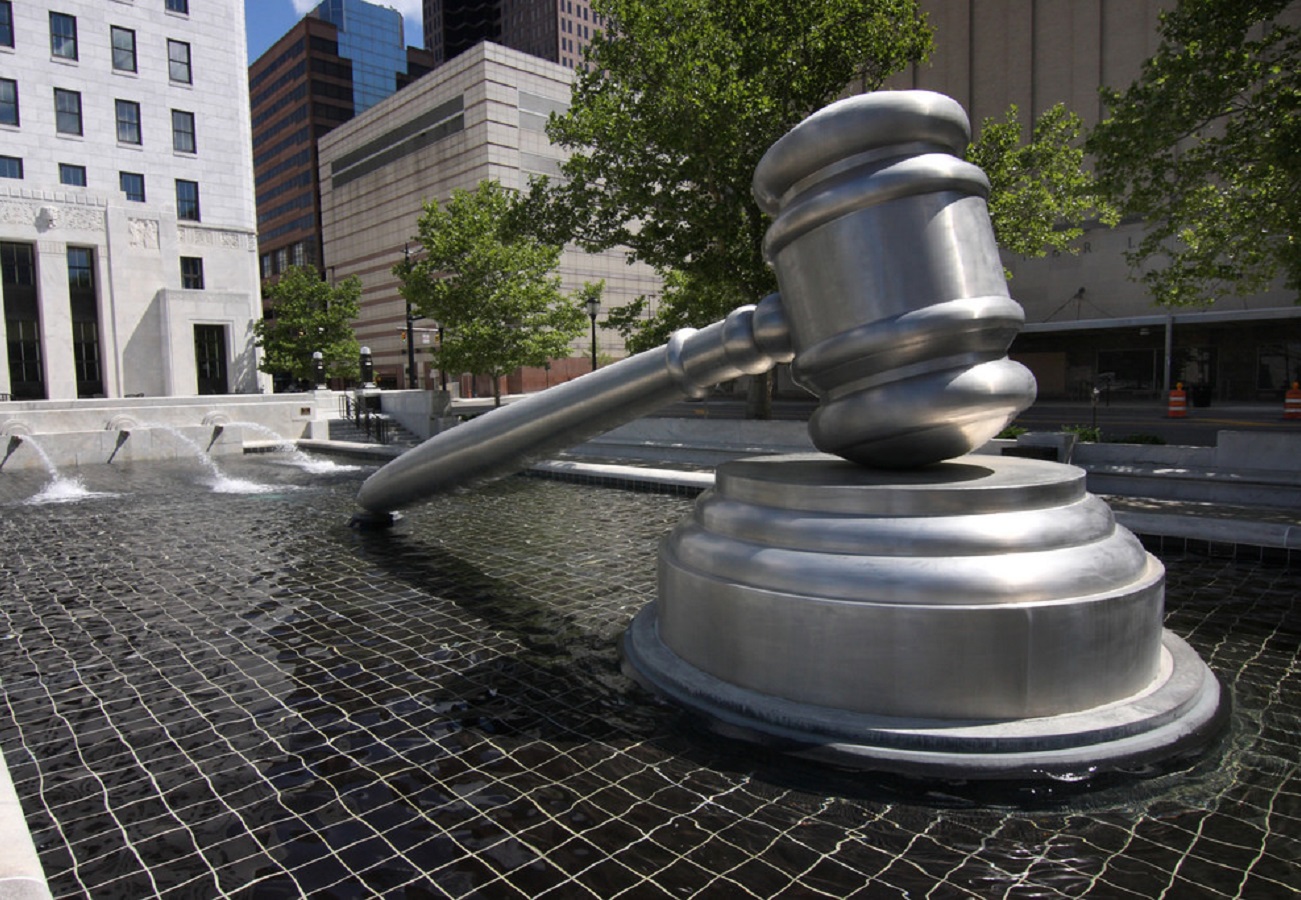 8. “Gavel”
Columbus has officially made world records with the giant “Gavel” sculpture Downtown, the largest of its kind on earth at 30 feet long and 12 feet high. Almost as recognizable as the Scales of Justice as a symbol of the judicial system, the stainless steel gavel sits on Front St. just around the corner from the Ohio Statehouse and pays homage to the Ohio Supreme Court. It also has the scenic Scioto Mile and riverfront as a backdrop. 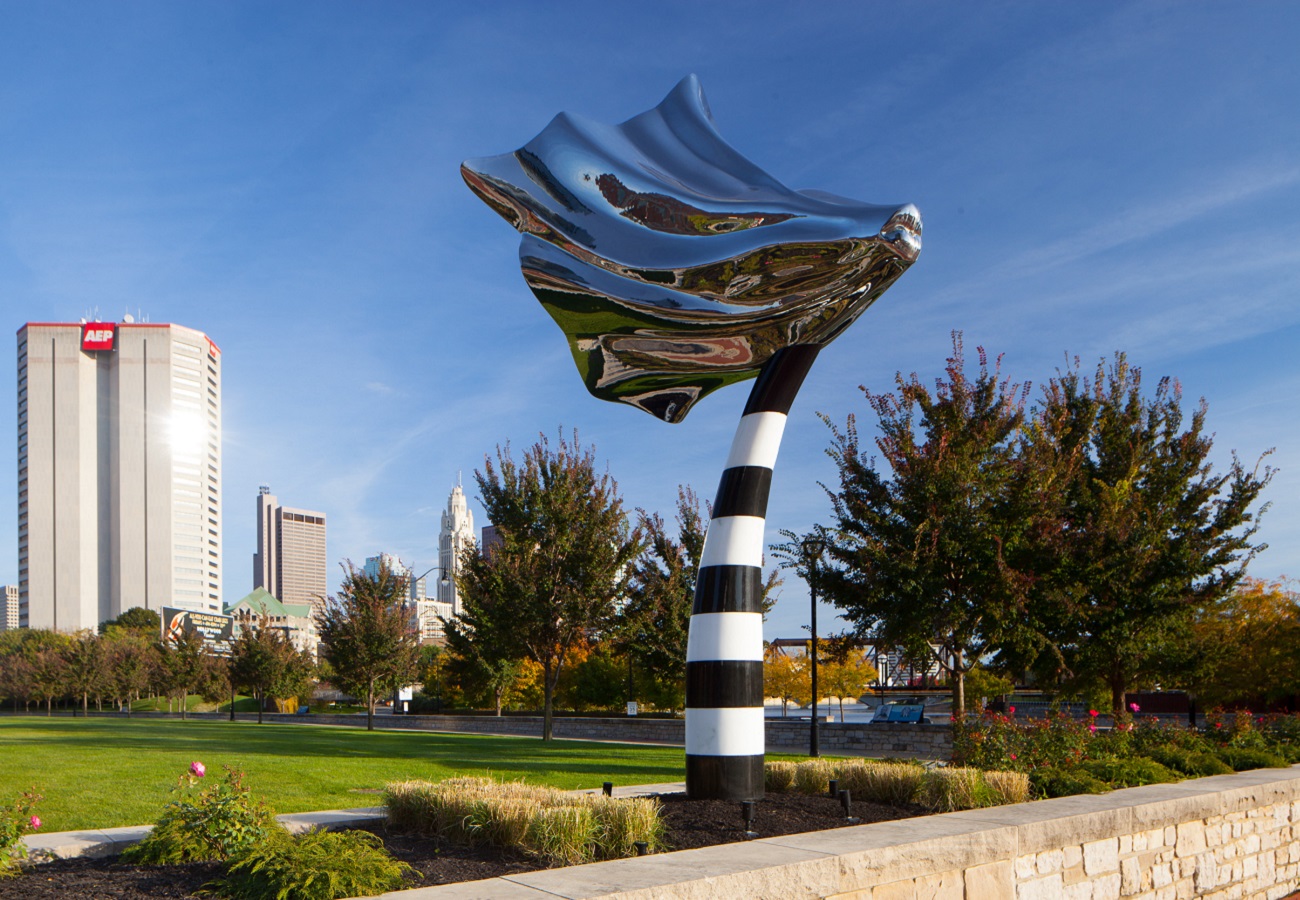 Via City of Columbus

9. “Flowing Kiss”
Lawrence Argent was inspired by the deep sense of community, pride, and love for Columbus shared by the city’s inhabitants for his public sculpture “Flowing Kiss,” a project for the Columbus Art Commission. The two pieces of the installation depict the movement and motion of a kiss, with large sets of lips straddling Neil Ave, opposite each-other about 18 feet in the air. 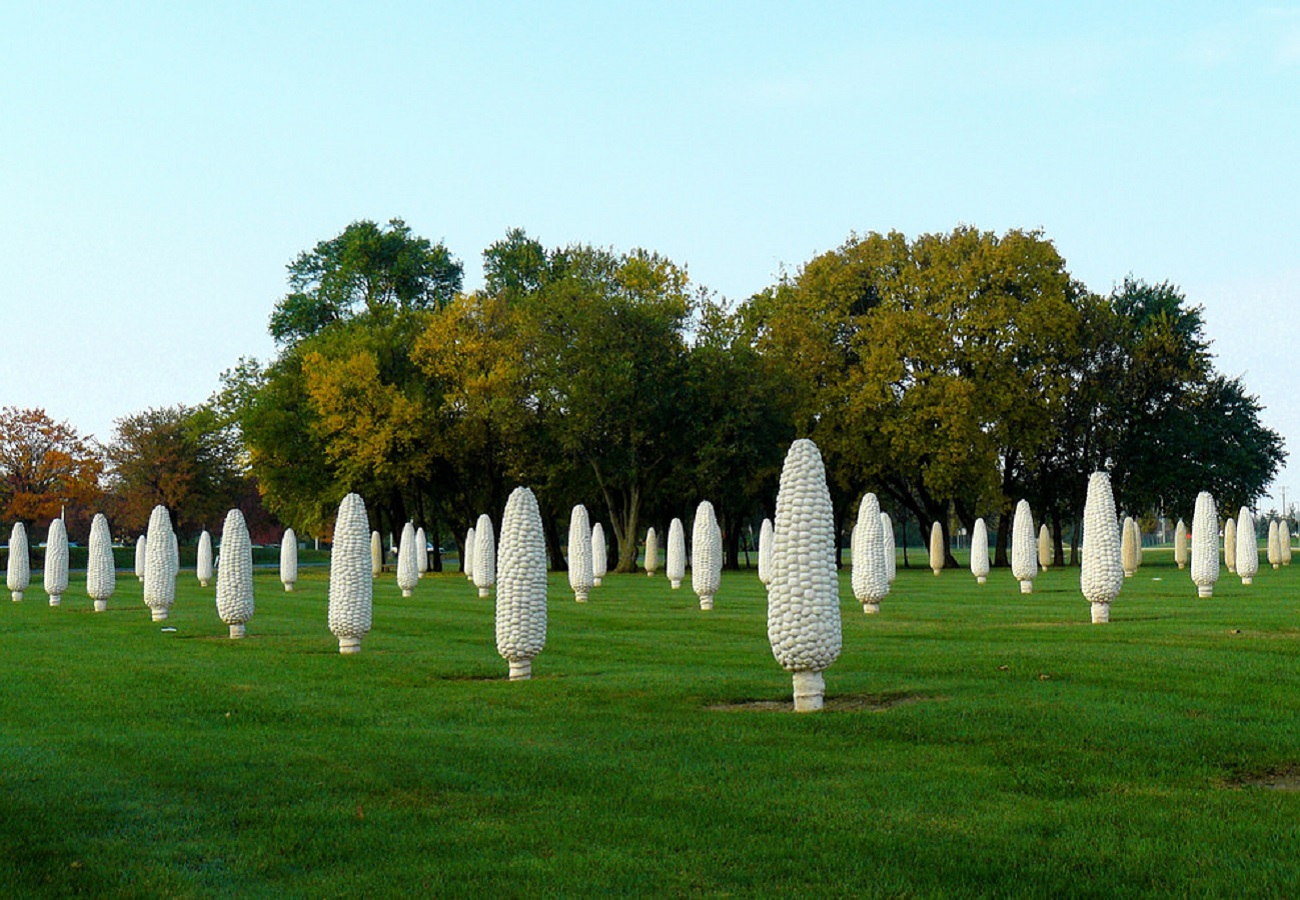 10. “Field of Corn”
As a tribute to Dublin’s rich agricultural heritage, the area’s Arts Council commissioned the “Field of Corn” installation in 1994. The sprawling arrangement, often appropriately referred to as “Cornhenge,” sits just off Dublin Rd, exhibiting 109 concrete ears of corn, each weighing 1,500lb. and standing around eight feet tall. It stands as an unexpected and strange, yet oddly fitting addition to the rolling fields that can be found on the outskirts of the city.

With such a booming and ever-growing arts scene, Columbus is destined for even more incredible public art in coming years. We can’t wait to see what evolves!