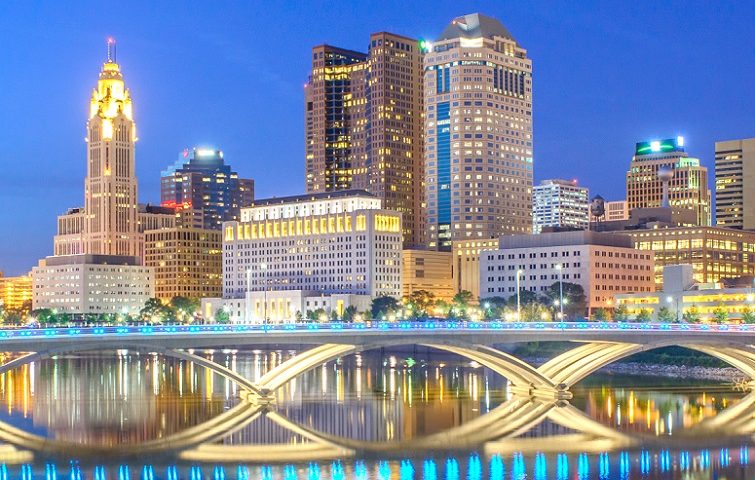 Downtown Columbus continues to experience renewed vitality and flavor as artists, restaurateurs, and young professionals flock to the heartbeat of central Ohio with its diverse neighborhoods and vibrant energy. You’d be hard-pressed to explore all that downtown has to offer in one day—in fact, you’d need to spend a few days exploring the likes of Columbus Commons, the Scioto Mile, the grounds of the Ohio Statehouse, South Fourth Street, and the Gay Street District, just to scratch the surface of what Ohio’s capital city is all about. But we’re going to help you try.

The Discovery District is the arts, education, and cultural hub of downtown, housing Franklin University, Columbus State Community College, the Columbus College of Art & Design, the Columbus Museum of Art, and the Columbus Metropolitan Library. You can perk up with a drink at Roosevelt Coffee House or Koko Tea Salon before enjoying outdoor life at the Topiary Gardens and Thurber Park. And every December, make time to catch a (free) ride on the family-friendly Holiday Trolley Hop through the Discovery District with stops at the Kelton House, Fort Hayes Metro Education Center, State Auto’s Nativity Display, Blockfort, and more.

A true pocket of metropolitan spirit, the Gay Street District is home to local foodie favorites Due Amici, Latitude 41, and Café Brioso. On Tuesdays and Fridays from mid-May through October, stroll through Pearl Market for a wide array of locally grown produce, hand-crafted merchandise, and delicious food. Or shop underneath the stars at dozens of sidewalk retailers and brick-and-mortar businesses who stay open late into the night at the Moonlight Market. It is hosted every second Saturday evening from April through October.

The River South District is courtesy of the redevelopment of the Scioto River area and features the natural beauty of the riverfront mixed with the urban environment of downtown. Host to the Columbus Arts Festival and the Smart Columbus Experience Center, River South is easily accessible using COTA buses, bikes, and even standup paddleboards. It’s also home to Bicentennial Park, where the city launches its fireworks show for Red, White, & Boom! each year.

The Scioto Mile comprises multiple neighborhoods that line the beautifully renovated, 175-acre lush parkland leading into downtown Columbus. Along this riverfront area, visitors can walk the mile, rent kayaks or paddle boards on the river, and enjoy arts and entertainment all year round. Bikeways and pedestrian paths help reconnect the neighborhoods north to south. Attractions include a 15,000 square-foot interactive fountain as well as the 120-acre Scioto Audubon Metro Park with climbing wall, dog parks, and an obstacle course.

Columbus Commons is home to the Downtown Live concert series and the Columbus Symphony Orchestra’s summertime Picnic with the Pops and Popcorn Pops series. The surrounding grounds offer kickball leagues, family fun, and events like Slice of Columbus, a central Ohio pizza tasting fundraiser for Nationwide Children’s Hospital. Lunchtime also brings a number of food trucks to the Commons for those who live and work in the area.

North Market is the OG food hall of Columbus. From 1876 when it was a market house (with a few other small businesses and restaurants on the land) to the present day, it has become known as central Ohio’s authentic public market. North Market is home to dozens of independent merchant entrepreneurs, farmers, and makers who deliver unique, delicious food and food-related merchandise, as well as seasonal festivals, throughout the year.

Downtown is a hub for the arts, hosting the Columbus Association for the Performing Arts (CAPA), which manages shows at the historic Ohio Theatre, Palace Theatre, Southern Theatre, and the Riffe Center Theatre Complex. The Urban Arts Space is part arts laboratory for Ohio State faculty and community artists, and part professional launching pad for OSU students. Enjoy paintings and sculptures at the Columbus Museum of Art all throughout their renovations and additions. Columbus Art Walks & Landmark Talks makes the downtown area more enjoyable and educational. Check out Consider Biking and Yay Bikes! to discover the numerous bike paths and two-wheeled activities.

Among the nearly 170 restaurant and bar options, make sure to check BurgerIM, Condado Tacos, Milestone 229, Nosh on High, and Winans Chocolates off your downtown foodie bucket list. The Elevator Brewery & Draught Haus also serves up tasty bites and spirits (legend says it is haunted) and The Hills Market is a locally-owned specialty grocer. The after-hours scene, relatively un-haunted, has option aplenty for the night owl including Mikey’s Late Night Slice (pizza by the slice with a side of pop culture, pizza-themed artwork), Dirty Frank’s Hot Dog Palace (more than 30 varieties and styles of frankfurters), The Walrus (clever bar bites, craft brews, and live music), and Pins Mechanical Co. (serving up craft cocktails with duckpin bowling and pinball).

Noteworthy annual events also include the Arnold Sports Festival, Bike the C-Bus, Festival Latino, Asian Festival, the Columbus Pride Parade and Festival, and the Columbus Food Truck Festival – to name just a few. Events are also plentiful at the 1.8 million-square-foot Greater Columbus Convention Center, ranging from quilt shows to gaming conventions and fencing nationals. And while inside the convention center, interact with “As We Are,” a 14-foot, three-dimensional human head sculpture designed by Columbus College of Art & Design’s Matthew Mohr. The sculpture is the only one of its kind in the world and has already become a significant selfie station for residents and guests.

Recent estimates count 9,270 residents living in the downtown core, with numbers expected to grow to 11,900 people in 8,886 housing units in 2021 and 14,000 people in 10,642 housing units by the end of 2022. If you’re looking to live downtown, you can call upon the Downtown Residents’ Association of Columbus (DRAC). The group connects people through social events and community activism while promoting downtown living options. Looking to move or relocate downtown? Visit DowntownColumbus.com for rental and for sale properties, parking, events, shopping, culture and more.