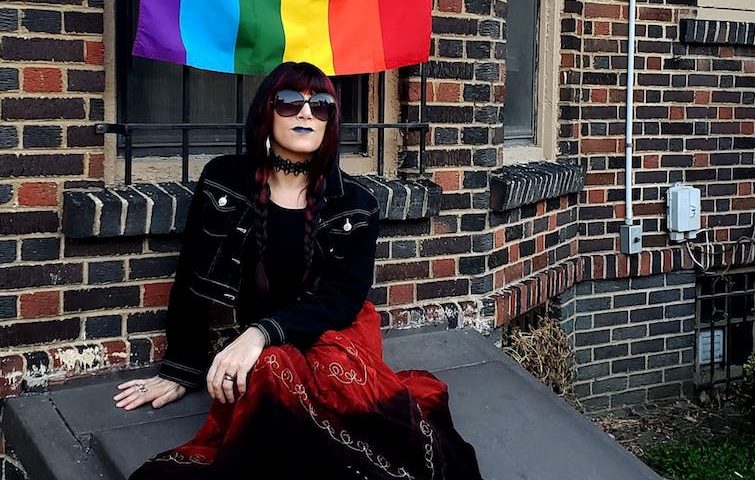 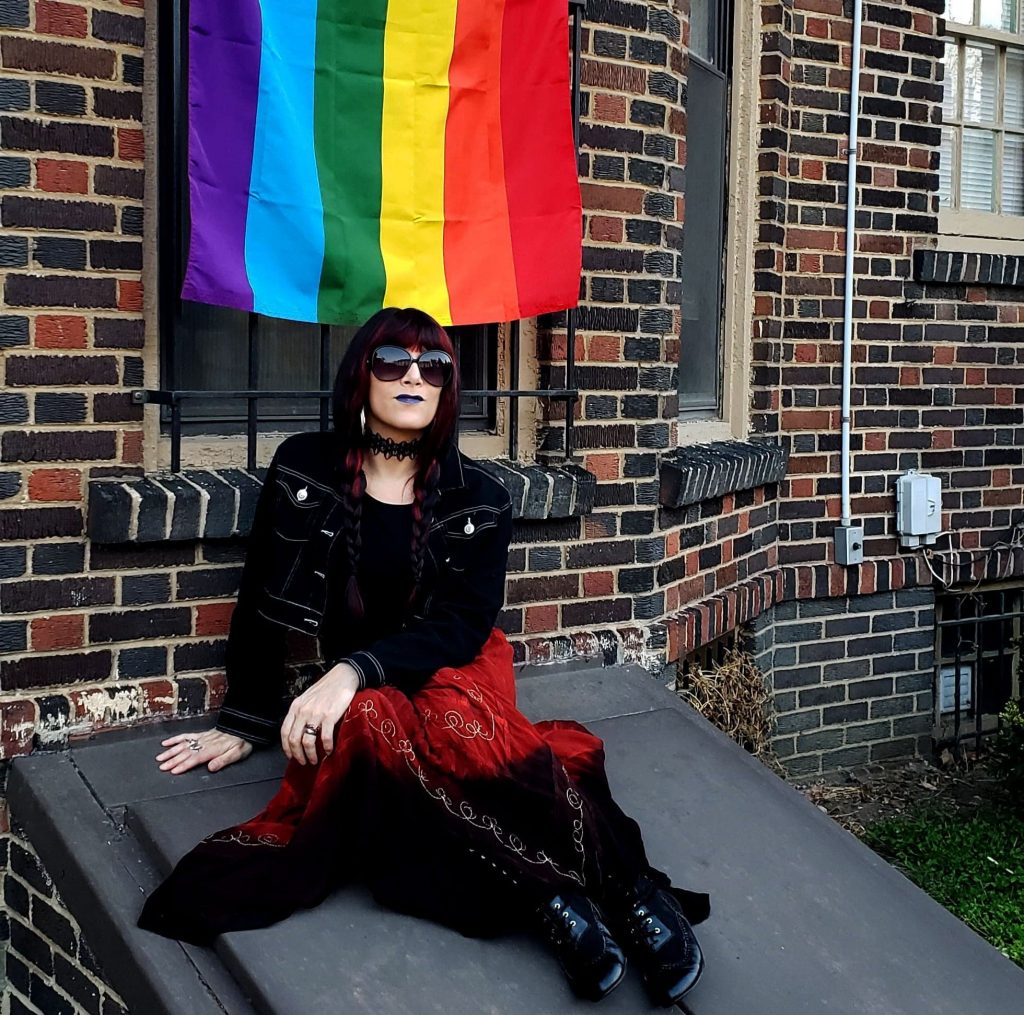 Felicia DeRosa is an internationally acclaimed multidisciplinary artist, educator and activist. A New York born San Franciscan, she became a staple of the west coast “Low-brow” / “POP Surrealism” scene of the early 2000’s, exhibiting across the U.S., Europe and Taiwan. In 2010, after a cross-country art tour, and a few years in Chicago mentoring and doing public art, she escaped to the E.U. for a five-month adventure of art, and friendship as a guest of her Belgian-based gallery. That August, she and her wife Gwen landed in Columbus to pursue their MFAs, and shortly after, DeRosa immersed herself in the local art scene. Midway through her graduate studies at CCAD, her expertise landed her a six-year position teaching technical anatomy and drawing. Felicia works to raise awareness of intersectional issues in the queer, trans and BIPOC communities, and believes wholeheartedly that Black Lives Matter.

Last year, Felicia started a program in collaboration with Wild Goose Creative called Trans Storytelling or “T” Talks, is an inclusive, intersectional, free monthly storytelling event for and by the transgender community. We sat down with Felicia to talk about all things art and what’s next for “T” Talks. 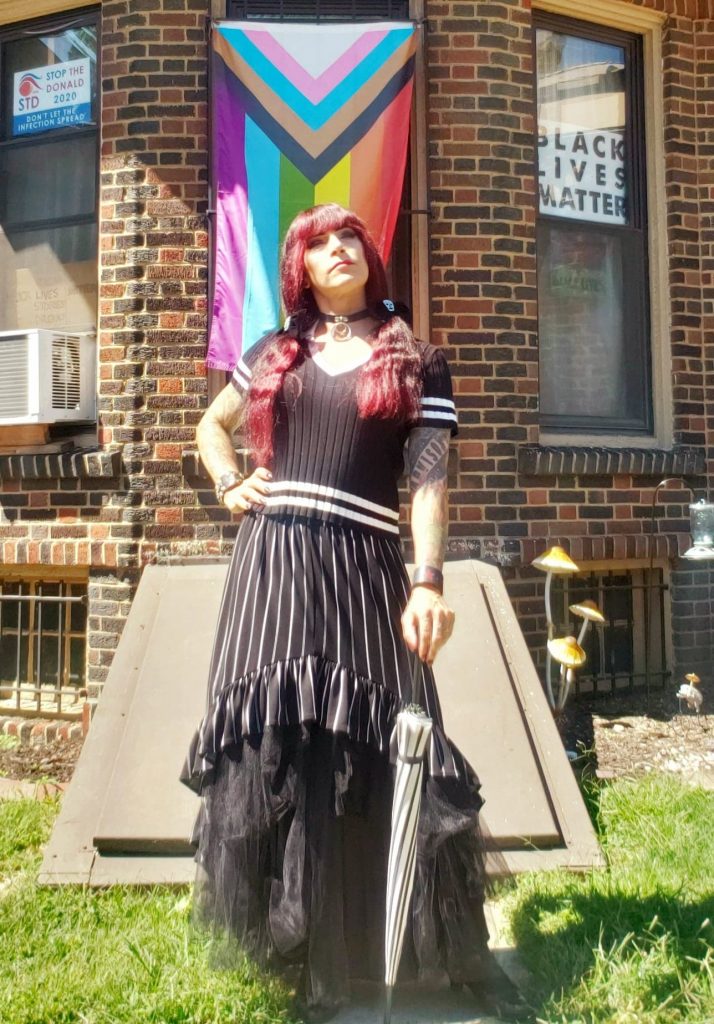 Lydia: Tell us about yourself. How did you get your start as an artist?
Felicia: Art has always been at the core of who and what I am… When I was nine, an uncle of mine pulled a tiger out of thin air and confined it perfectly to paper. It was the most amazing thing I had ever seen. When I asked him to do it again, he handed me the pencil, gave me a pad of paper and left the room. That was how I was initiated. Three years later, my eighth grade art teacher passed some of my drawings to a local gallery. I got invited into a group show and I haven’t stopped doing the thing since.

Lydia: What concepts and conversations are you currently exploring with your body of work?
Felicia: I am currently developing a body of work that confronts male toxicity. It’s a series of autobiographical sculptural installations taken from my own experience of being raised in CIS male culture – as a trans feminine person. Additionally, I’m mid way into a series of delicate portrait studies painted in subtle gray hues that aim to capture authenticity, by presenting a person in a state of becoming.

Lydia: What type of work do you feel most challenged and excited by?
Felicia: Writing. I love narrative. I’ve been nursing a few writing projects all throughout 2020. Hope to finish at least one of them… soon.

Lydia: You’ve lived in Columbus for the past decade. Why Columbus? How would you describe the creative scene here?
Felicia: LOL! I get asked that ALL THE TIME; ‘Why Columbus?’ Why NOT Columbus? Art took me to Europe for a time. When we (my wife Gwen and I) came back to the states (2010), we landed here to be closer to family. I got enticed by the underground scene – which feels like a kind of Renaissance, picked up a gallery and found a home.

Lydia: You started a program called Trans Talks or “T”- Talks at Wild Goose Creative. Tell us more about the program!
Felicia: YAS! “T” Talks seeks to undermine and disarm the discrimination, oppression and violence of/towards trans-identified people socially, politically and culturally. The hope is that by sharing our stories with the rest of the queer/ally community and, ESPECIALLY, those outside the trans/queer community, we can dismantle the ignorance of who we are. And, thereby, fight against the hate and violence that threaten our basic human, inalienable rights of life, liberty and the pursuit of happiness. As an educator, I believe proper education is key to the success of empathy, which is key to proper understanding. So, “T” Talks then counts as an informative, educational series with the higher goal of activism and advocacy. 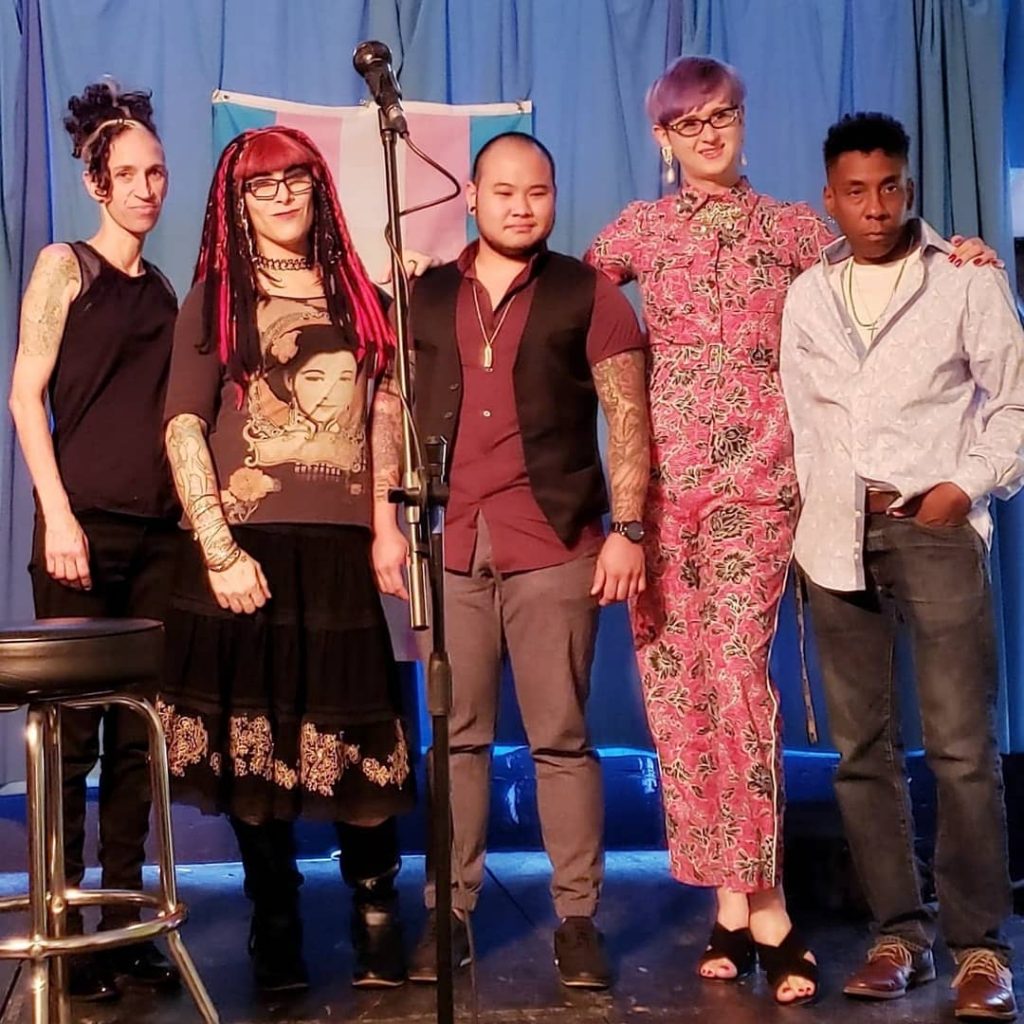 Lydia: What was the most moving experience you’ve ever had with art?
Felicia: I’ve had a few. Top of the list, seeing as I have to pick, was from my time in Europe. After my shows were done, and work delivered to my then gallery peeps, Gwen and I took to backpacking and couch surfing. We went wherever the wind took us – worked a few Organic farms in exchange for food and board. We had just wandered into France, when one of my best friends from college, who had married a lovely guy from provincial France, offered us their home there, so long as we could find our way. We never had a honeymoon, so this was it. We spent SIX creatively blissful weeks in a small town called Cogolin.

A mile or so away, was the place where Van Gogh lived and painted. I stood where he once stood and took in the light, the color-saturated landscape, and wept. I see his paintings VERY differently now, and it changed how I see in a deeply profound way that I can’t fully describe.

Lydia: What’s next for you in 2021?
Felicia: I want to take “T”-Talks to other towns and cities. I also hope to launch an art educational nonprofit to better serve and lift my community. I also plan to adopt a new hedgehog. I love those little spikeballs.

Interested in attending “T” Talks? All are welcome. Join us every third Wednesday of the month at 7 p.m. Check our calendar for updates. This season’s “T” Talks is supported in part by the Greater Columbus Arts Council, CoverMyMeds and the Tom E Dailey Foundation.