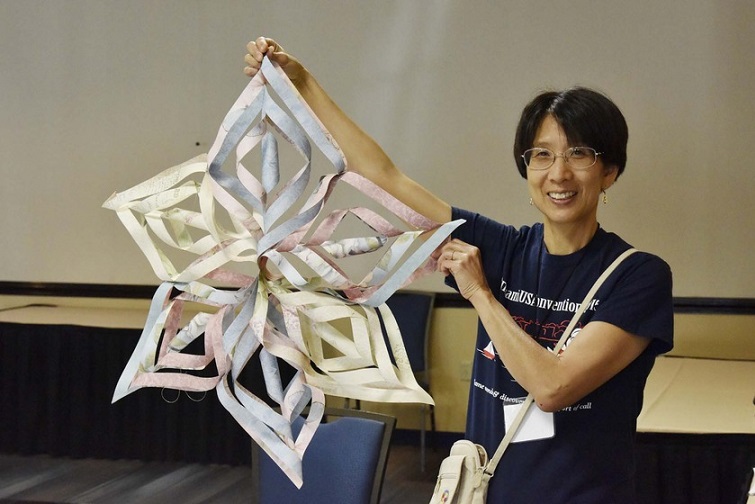 Ohio Paper Folders founder and director, Monica Salisbury, asked musician and origami artist Sheree Green some questions about her work. Sheree will be teaching with Ohio Paper Folders at the Columbus Arts Festival, June 9-11. Sheree’s art will be on display at CenterFold (July 21-22) as well as the Thai Grille in Westerville.

Monica: What drew you to origami?
Sheree: When I was eight, in 1961, I given my first book on origami. It may have been the first origami book published in the U.S. This was just before my family began a car trip from Ohio to California, and I brought the book along with me. I worked through all the models in the book, although I remember the traditional frog was quite a struggle. I had to stop several times due to frustration and come back to it later. Eventually, I managed to finish a frog. It’s not easy to figure out diagramming on one’s own. (It’s a huge help today for origamists to have instruction videos readily available – and it’s also WONDERFUL to have groups which meet to fold together.) From that first origami experience, I was hooked! I’ve loved paper arts from the time I was very young, and origami is one expression of it that I’ve returned to again and again. By the way, there were a few sheets of Japanese kami in the back of my first origami book. They were so precious to me that I refused to use them because no project ever seemed worthy! Instead I folded with scrap paper my father had brought home from the office. I still have that book upstairs in my art library, and the paper is still there inside the back cover.

Monica: You’re a professional musician. Do you see any similarities between music and origami?
Sheree: I see many commonalities. Playing an instrument and folding origami each require setting a goal, patience, precision, focus and above all persistence. Both can be calming, relaxing and meditative and they’re both more fun practiced with others. Whether you make music or origami you can benefit from assistance.

Monica: You dance as well – swing dance, I believe. Do you see any influence or benefit to your origami work from your dancing?
Sheree: One thing I’ve learned from dancing is that I don’t have to be the fastest learner in a group to eventually be successful. I need help to learn both dance and origami. But I have such a love for each that I’m tenacious. I keep working until I have grasped the step/fold. This can mean looking for someone who’s patient enough to explain and demonstrate repeatedly until I understand the dance steps or folds and manipulations. In short, I’ve learned to be more patient with myself and to act as an advocate for myself, in either dancing or in origami.

Monica: What’s your favorite food and do you prepare it yourself? If not, where do you go to get it?
Sheree: Friday night I prepared some Pad Thai (rice noodles with peanut sauce), which is so much easier to do now that I’ve discovered sauce in glass jars which I can modify to my own taste. I also love to cook Indian food, because I can empty the fridge of fresh vegetables; it’s such a forgiving cuisine (or can be approached that way). My favorite Thai restaurant is Thai Grille in Westerville. They use fresh ingredients and my favorite Indian restaurant is New India on Bethel Road.

Monica: Do you think that the community at large could benefit from learning origami?
Sheree: Anyone can learn to fold paper, especially with hands-on help. Many people will find a sense of satisfaction in taking something as simple as a plain sheet of paper and folding it into something fun, interesting or useful. There’s a move toward re-purposing materials today (considered even better than recycling and taking any kind of scrap paper, magazine cutouts, pages from discarded library books, outdated business cards, non-sensitive office printouts, architectural drawings, damaged piano roll paper, use your imagination) and creating something new with it. This is very exciting and fashionable and the benefits are well worth exploring.

If you’re interested in origami and would like to help Ohio Paper Folders you can call (740) 334-4213 to help set up for the Columbus Arts Festival on Thursday, June 8. The festival runs June 9-11, and you can find Ohio Paper Folders there all weekend. For more information visit www.ohiopaperfolders.com.