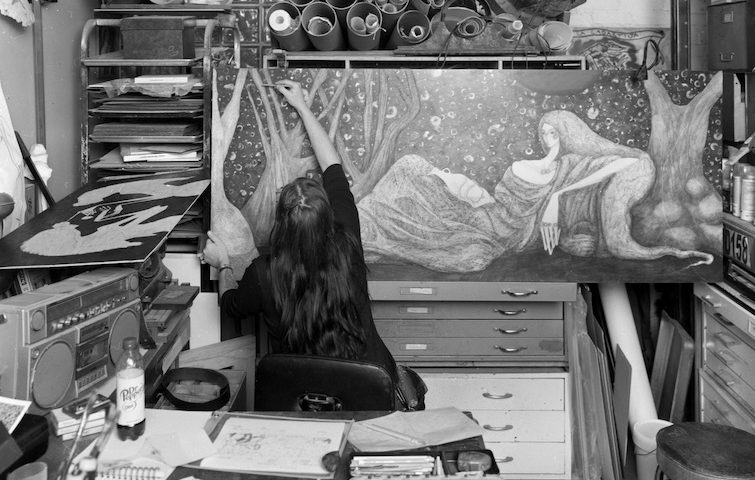 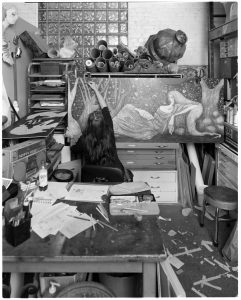 Kate Morgan has exhibited at the Columbus Arts Festival several times, starting in the Emerging Artist program and graduating to a full-time festival artist. She’ll be appearing at the Festival this June 10-12, so we chatted with her about her experiences as an exhibiting artist.

Nick: For newcomers, how do you describe your work?
Kate: I would describe my work as a combination of drawing, painting and collage (2D mixed media). I’m inspired by a ton of things but most notably folklore, mythology and the wonder that happens in those worlds.

Nick: When did you participate in the Festival’s Emerging Artist program? What was that process like for you?
Kate: I can’t remember the year I was an Emerging Artist… maybe eight years ago? I had done a few smaller shows but nothing close to the size and scale of the Columbus Arts Festival. I was completely overwhelmed (I still worked a full time job and was using all of my spare time to prepare). I was nervous I wouldn’t have enough work, the right work or that people wouldn’t like anything I made. It’s a lot of self pressure that I put on myself but I treated it as a challenge. The Emerging Artist program was great because they knew this and had us meet up a couple of times to go over some basics (like remember to bring business cards!) and other more complicated things like how to price your work. 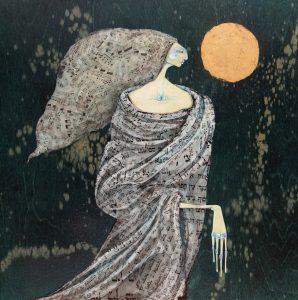 Nick: What was the most important thing you learned from the program?
Kate: What I learned from my experience is that being prepared as much as you can be really is what it’s all about. Planning and time management were chaotic at times but I rose to the challenge and when it was time for the show, I didn’t need to do anything but talk with people. It was really rewarding to have the mental space to focus on talking about the art with people – that’s part of the reason were there after all. I think I almost lost my voice it was so busy.

Nick: How has it felt returning to the Arts Festival as an exhibiting artist? What’s different compared to your experience as an Emerging Artist?
Kate: Every year I can’t wait to do the Columbus Art Festival—there’s no other show I do like it! I absolutely love it!

Nick: What’s a piece of advice you’d give to artists who are new to the festival circuit?
Kate: Advice I have for emerging artists or anyone who wants to start doing festivals is to DO IT! Start with small, local shows and focus on making quality work—don’t get overwhelmed by trying to make a TON of extra work. But most importantly: nothing will happen unless you put yourself out there. 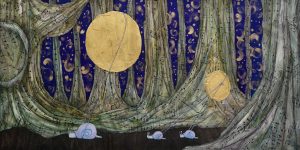 Nick: What are you most excited about for this year’s Festival?
Kate: This year I’m most excited about seeing everyone after being out for so long! Columbus has the most amazing, supportive community and it just hasn’t been the same without being able to have the Arts Festival.

See Kate and more than 200 artists, including this year’s 12 Emerging Artists, at the Columbus Arts Festival, June 10-12 on the downtown riverfront.

This article is brought to you by Art Makes Columbus/Columbus Makes Art, an initiative of the Greater Columbus Arts Council to raise the visibility of Columbus-based artists. Learn more at ColumbusMakesArt.com.