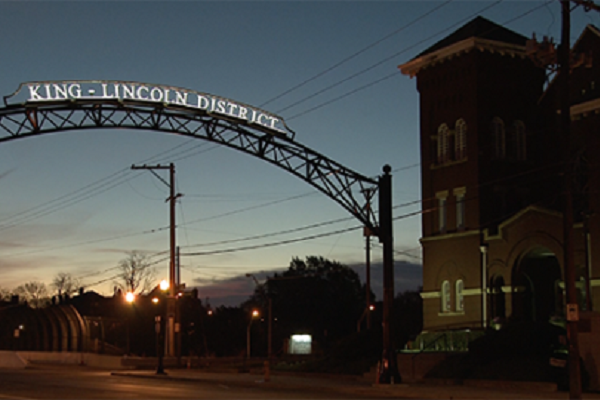 The Columbus version of New York’s Harlem, the King-Lincoln District draws people whose appetite for poetry, music and creativity are abound with enthusiasm for the diverse community. Whether referred to as King-Lincoln Bronzeville, North of Broad, KLD, or the “cool” shorthand for North of Broad: NoBo, this neighborhood’s roots extend deep in African-American culture, heritage, jazz, and the civil rights movement. All of which are embraced by the community through landmarks, architecture, and in the restoration of buildings.

King-Lincoln also encourages the use of its parks including Mayme Moore Park and Beatty Park. Other nearby parks include Saunders Park, the Topiary Park, and Franklin Park Conservatory and Botanical Gardens, all located within the limits of the Near East Side. The Near East Side is not separate from, but rather encompasses the innovation of the King-Lincoln District.  This area is bordered by highways on three sides – I-670 to the north, I-71 to the west, I-70 to the south, with Alum Creek as the dividing line between it and Bexley.

King-Lincoln Bronzeville thrives in its own microcosm of renaissance. This is the place for people looking for downtown entertainment. The area is situated in central Columbus just east of I-71 with the rest of the Near East Columbus to the east, downtown to the west, Mount Vernon to the north, and Olde Towne East to the south. The neighborhood is perfect for the downtown commuter and provides easy highway access for the young professional traveling further from home.

The Lincoln Theatre is a tremendous success in providing a multi-use space that enhances the district’s economic impact. With the original art-deco design restored to its former glory, the theater re-opened its doors in 2009. Check out the King Arts Complex for educational opportunities as well as arts and entertainment events including a gallery and exciting programming.

The Homeport Gallery is an innovative project to develop communities through the use of art. Looking for the hometown coffee house? Consider the Lincoln Cafe for breakfast or lunch. Here you’ll also discover entertainment in the evening hours with a Tuesday night jazz series and Thursday night poetry. For a change of pace, attend the annual Heritage Concert Series in Mayme Moore Park held through July and August. As for nightlife, take a look at Canabar or indulge in the food scene at Creole Kitchen.