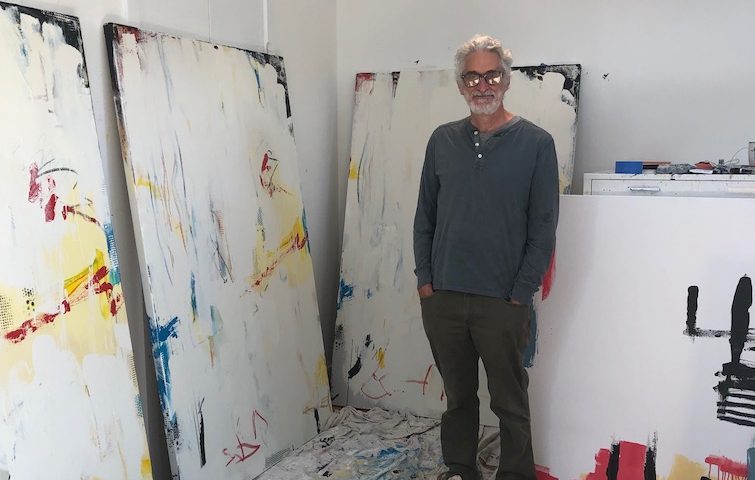 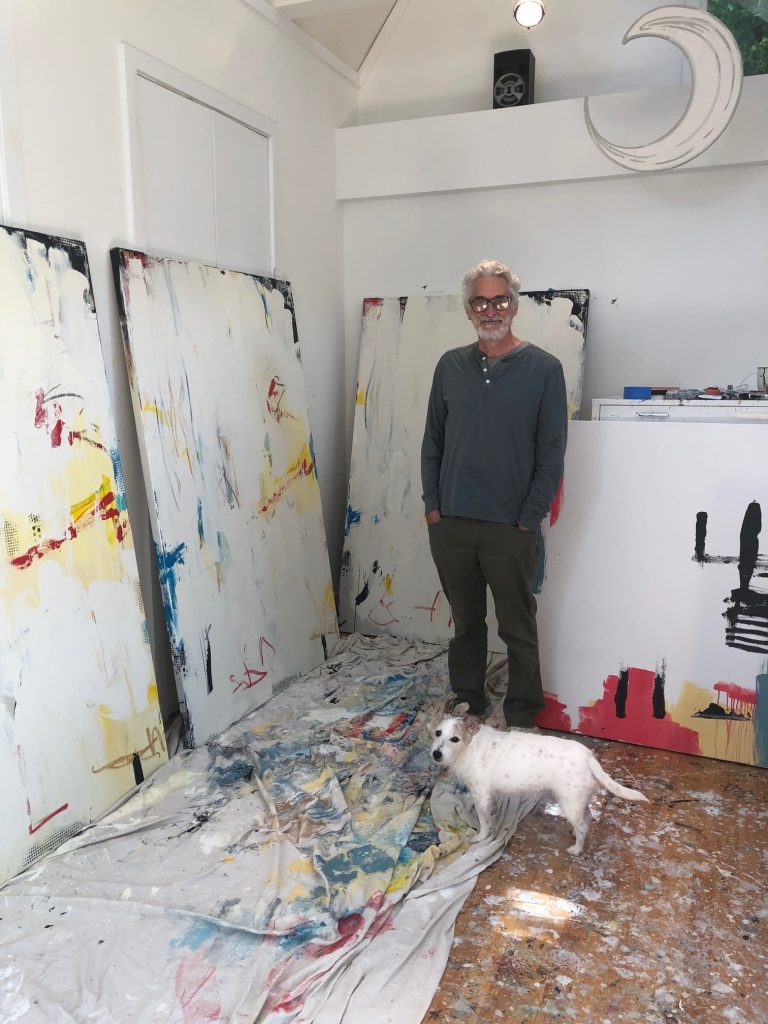 Emma: Can you start by telling us a brief summary of your upcoming exhibition?
Patrick: Well, it’s the first exhibition of the crazy, turbulent paintings I created during the crazy turbulent years of 2016 through 2021. I enjoy drawing MUTTS, but for years I’ve been doing large abstract paintings whenever I had the time. Eventually I thought it might be interesting to add some comic characters. It started out with the addition of Nancy and Sluggo, but then I began using other characters to comment on the unsettling emotions I was going through in such unprecedented times. The art piled up and evolved into a body of work. There are over 100 paintings in total, and The Ohio State University and the Urban Arts Space is graciously showing 54 of them in this exhibition.

It was initiated when Jenny Robb, curator at The Billy Ireland Cartoon Research Library, saw my work. I thought it might be nice if the museum had one of my paintings in their collection or in a future exhibition. It was Jenny’s idea that the Urban Arts Space might be a better place to show them. So, the following year I was in Ohio for CXC and when Jenny showed me the Urban Arts Space gallery, it was so big, so beautiful, I was intimidated. It’s the size of a floor in the Whitney Museum! And at that point, I didn’t think I would have enough paintings to fill the entire space. It’s two years later now and, especially with the lockdown, I’ve had the opportunity to paint a whole lot more. This body of work represents a visual documentary of the roller coaster we’ve all experienced over the last four years. And I’m really looking forward to seeing these paintings all together in one gallery space. 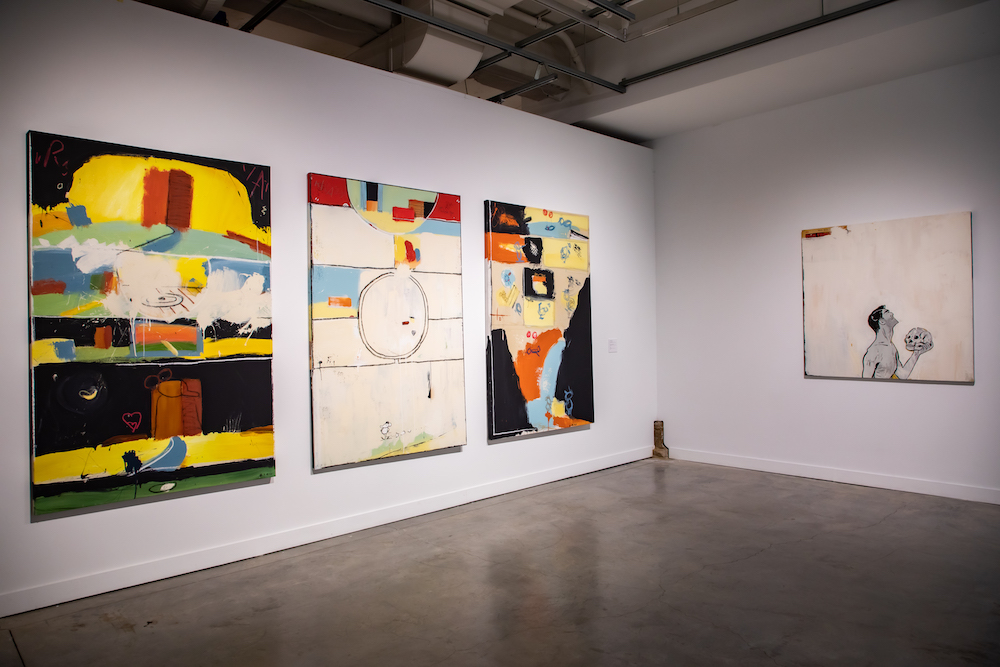 Emma: Throughout this exhibition, you incorporate classic comic strip characters throughout your paintings. What sparked this inspiration to add “surrogate viewers” to your works?
Patrick: Ever since college I’ve been doing large abstract paintings. When you create a comic strip, especially a daily comic strip, it’s inherently limiting in size and format. There’s some monotony to it but there’s a zen to it, too. The abstract paintings are more of a release, more fun. I had all these paintings piling up, and I realized that the only people who saw them were myself, my dog, my wife and the occasional friend. So, it was just a funny idea that maybe I could add some people to the paintings, observing the art.

At the time, I was rereading Ernie Bushmiller’s Nancy, a great, unintentionally surreal strip. Bushmiller regularly drew his characters from behind, so you would be seeing the back of their heads. Part of the Nancy joke is she’s always witnessing strange things, so I thought Nancy and Sluggo would be great characters to add. So, I started adding them and it became kind of an addiction. It’s a nice combination of the two loves I have because I love abstract art, but I love comics, too. After a while I got bored with Nancy and Sluggo and thought it might be fun to add other characters, in particular, Milt Gross’s characters. So that’s how it expanded. 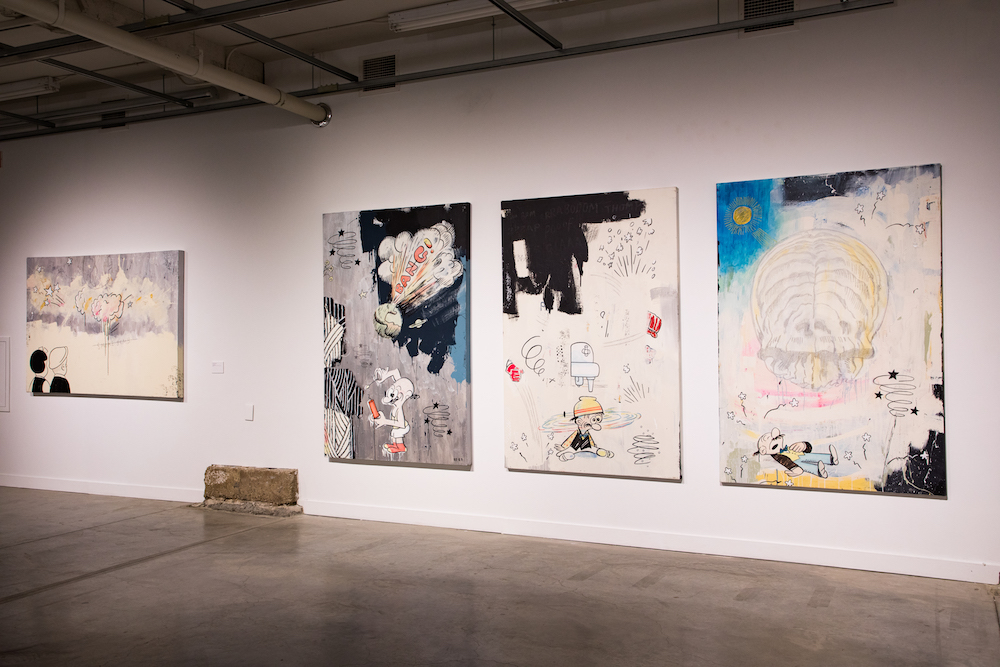 Audrey: You once stated that having this unexpected outlet was “my second shot.” What made you want to exhibit this “second shot?”
Patrick: Well, by “second shot” I meant it’s like the COVID vaccine. A second shot could free you and make life livable again. During the COVID lockdown, doing the paintings is what made my life livable. Hopefully the paintings are relatable since we were all going through the same things. For me, it was a healing experience to just work in my painting studio and enjoy the process. I didn’t create the art thinking, “Oh I’m going to make a statement about this, or I’m going to make a statement about that.” The abstract parts were just me loving to paint. Adding the characters was more intuitive. I didn’t do sketches of the paintings first; I just kept on adding and subtracting. After each was completed, I would try to figure out, “What is that about?” Now, looking over the show, I realize it was about living during these times.

Side Effects: Paintings by Patrick McDonnell 2016-2021 will be on display at Urban Arts Space through Oct. 3.