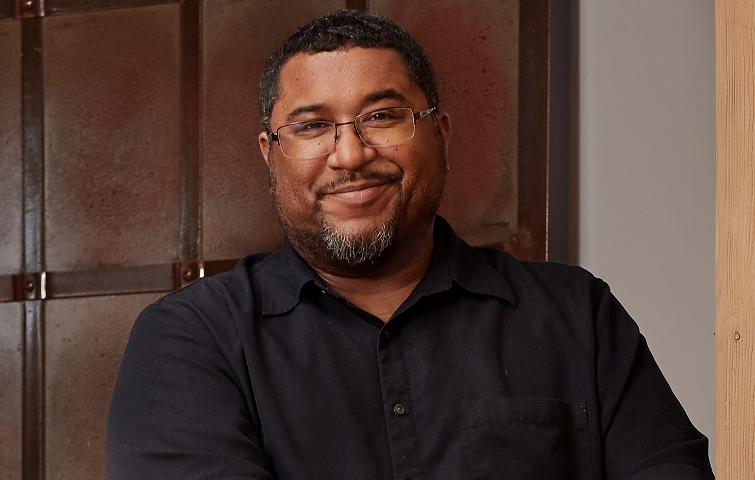 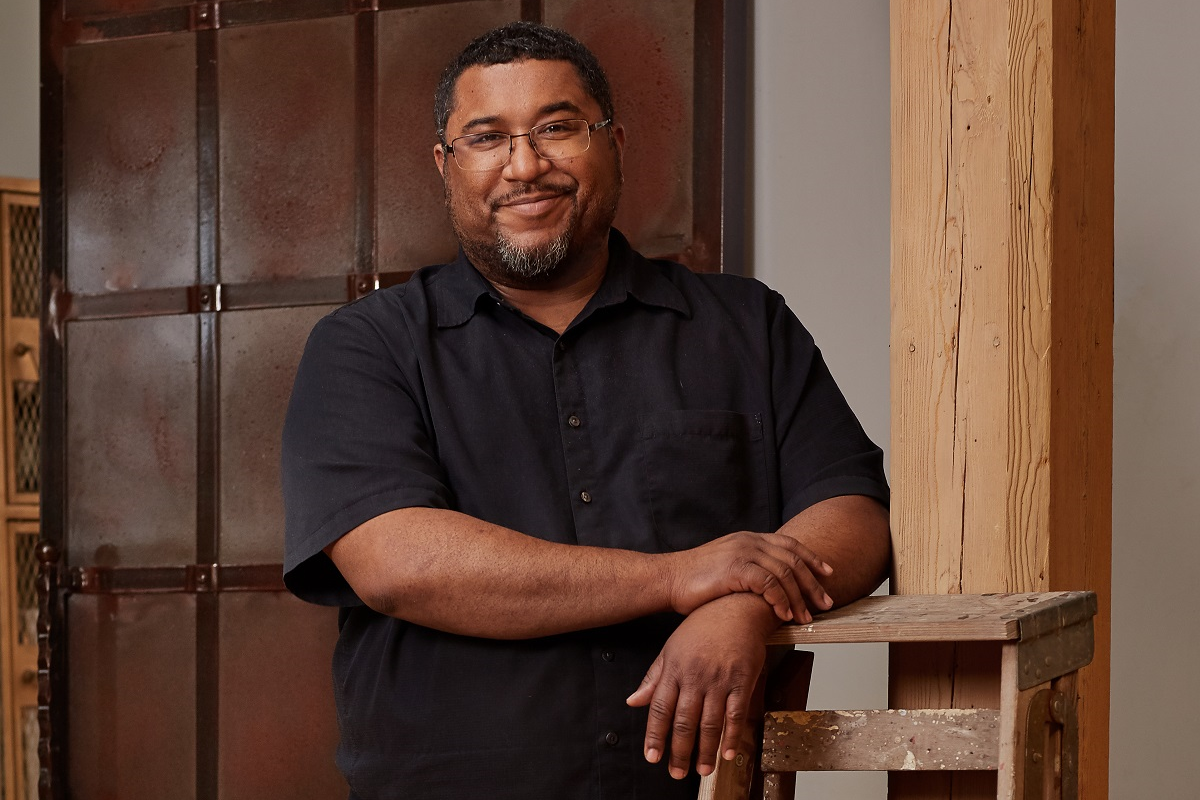 Just two years ago, Scott Woods created an event called Holler: 31 Days of Black Columbus Art. The response was so overwhelming, it led to the founding of nonprofit organization, Streetlight Guild, whose goal is to “generate, curate and preserve Columbus-based art and culture in a variety of disciplines with a focus on local, original work from underrepresented voices.” Woods, a writer and 20 year veteran with the Columbus Metropolitan Library, has made it his mission to develop “original Columbus culture”: no easy task. For a bit of whimsy, he keeps a kite in the back of his car just in case conditions are favorable.

Give us a brief overview of your organization: In 2017 I put together a series of events called Holler: 31 Days of Black Columbus Art, putting on a different art-based show every day for a month. Thousands of people attended, a hundred artists were utilized, and almost a dozen venues and institutions participated. Seeing how powerful the response was inspired me to figure out how to bring that level of quality art and culture to the city on a regular basis, and Streetlight Guild was the answer. Our goal is to generate, curate and preserve Columbus-based art and culture in a variety of disciplines with a focus on local, original work from underrepresented voices.

How you are innovating in the nonprofit space? Streetlight Guild is committed to developing original Columbus culture as a goal, not a means to an end. A lot of words that get tossed around in typical institutional settings are genuinely applied values with us: community, agency, independence, originality. All of these are the starting points for any event or programming we do. If an idea doesn’t have those elements, it doesn’t get to the table.

How is your organization making an impact in Columbus? We labor to fill the awareness gap from a position of agency, not just the occasional gig or job. We connect creators and develop talent that are in control of their engagements with institutions who seek to expand and diversify their outreach. We try to make sure those people who can create and advance culture are not only financially supported, but ethically engaged and philosophically trained. We’re also opening a performance venue this year to amplify that programming

What makes your organization thrive? Community. People believe in what we’re trying to do, because I make it clear that developing community is not a priority but a goal. I’m not succeeding if my community isn’t developing. There is a wellspring of support that comes from engaging community as the point of your work, and a freedom of vision that comes from knowing you have the support you need before you ever take a meeting.

As a leader, how do you come up with innovative ideas, and what helps put those ideas into action? My job is basically coming up with ideas for programming that push the envelope of artistic engagement in ways that advance the culture conversation. Conversely, a lot of our events are unapologetically political, but without compromising the artistic endeavor. One of our arts shows, “GentriFried”, was an exhibit in which all of the art was food-based and manipulated to make some comment on local gentrification. It was designed to imitate a pop-up restaurant, but with political commentary baked into the work. All of our programming isn’t that on the nose, but we don’t shrink from those conversations.

Give us a snapshot of your career path—what is your background, and what led you to work in the nonprofit sector? I’ve worked for the Columbus Metropolitan Library for over 20 years. At the same time I spent much of that time organizing events nationally and locally. I did a decade of executive council work for Poetry Slam, Inc. at the national level, putting on three large convention-style events per year. It was my first non-profit experience working behind the scenes. When I retired out of that work it was as president, and I was eager to bring those skills I developed back to Columbus and work on building up the art scene. Columbus is rich in talent, but short on professional-grade support that understands what it’s like to try to navigate an artistic path. I was compelled to fill that gap.

What is the one thing you are most passionate about? Writing. I’m a writer by profession and nature, and every success I’ve had in the world has come to me by writing, by what I could produce with my two hands. It is a powerful thing, to be able to generate the means of your existence through your gifts.

Who inspires you? Prince. He was supremely talented, which can get you pretty far in this world on its own. But he was also a rebel, always looking for ways to innovate not just his art but his business dealings, distribution of his work, and control over his intellectual property. He realized how important it was to control the narratives associated with his work, not just for his benefit, but on behalf of people who might follow in his footsteps. There are lots of reasons for that, but I tend to draw out the ones that focus on work ethic and audience engagement. Also, he was very conscious of the notion of legacy, and I try to keep that value in mind. The work I’m doing isn’t for me, but the people who come twenty years after I’m dead.

How do you stay motivated? What drives you to take things to the next level? I love a good game, and know that there is always a new way to do something: a new artist to discover, a new organization to work with, a new combination of angles and resources that can be combined to create something meaningful in people’s lives. I don’t do any programming with only one goal in mind. All of my work operates on several levels at the same time, and I love figuring out ways to keep layering and compounding those experiences for people.

What struggles or adversities have you had to overcome to get to where you are today? Columbus struggles with identity. I’ve essentially made it my job to combat that dilemma, and some days it seems insurmountable. It’s a city with a million people in it. Many of them are perfectly fine with the way things already are, and don’t like when someone comes along trying to make waves. But I believe that Columbus can be a better place to thrive, not just live and exist in. That requires a lot of education and sacrifice and audibles that are often met with resistance, sometimes from surprising corners. So I’ve had to develop a pretty tough skin.

Why do you think people should care about innovative nonprofits? People should care about innovative nonprofits because it’s where work that strives to matter to people is being done. Any venture can work toward profitability and prestige. But the paperwork to even become a non-profit asks that you list how you mean to contribute to society as an organization. You can’t be a nonprofit unless you at least check a box that suggests you’ve considered the possibility of stewardship. So if you care about improving the culture of your corner of the world on any level, a good place to start is by seeing what nonprofits are active in your area and what they’re trying to accomplish. Chances are, they’re doing it in your interest.

As a kid, what did you say you wanted to be when you grew up? A writer, which I am, but I imagined it would be me in a garret cranking out novels. That’s kind of become my retirement plan now, so I still have time.

What might others be surprised to know about you? I keep a kite in the back of my car in case I’m out and a good wind kicks up. Flying kites is the ultimate way to unplug for me. A kite requires your full attention, and you have to put all of your body into it. And it’s just uncommon enough that when people see you doing it, they slow down their lives for a moment, and that’s kind of a gift as well.

How can others in the Columbus community get involved with your organization? Be on the lookout for our events. When we open this venue this Spring it’s going to rotate music, art, poetry and more out of there on a regular basis, but under the in-house model, meaning almost all of the programming will be things that I produce. Eventually I want it to be a place that people can go to almost any time and there would be something great happening. To get things started, it will have more of a Preservation Hall (in New Orleans) sense of purpose, where if you want to go where genuine and original culture is happening, that’s the place where you can be assured it is.

If someone were to ask you what the “pulse” of Columbus is, what would you tell them? That it’s evident that it has a heart, but it needs to make sure blood is going to the whole body. Columbus can be so much more politically, culturally and socially. More, it’s clear that the work to realize that potential is going to have to come from communities and move upwards, not vice-versa. Organizations – particularly nonprofits – that bear that in mind will succeed.