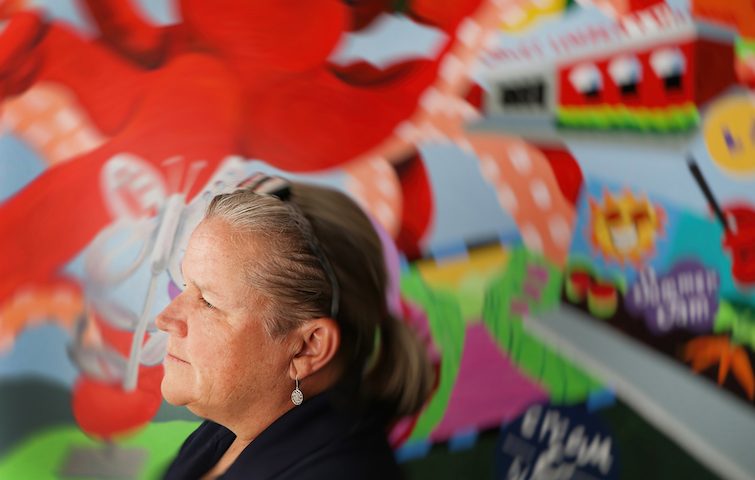 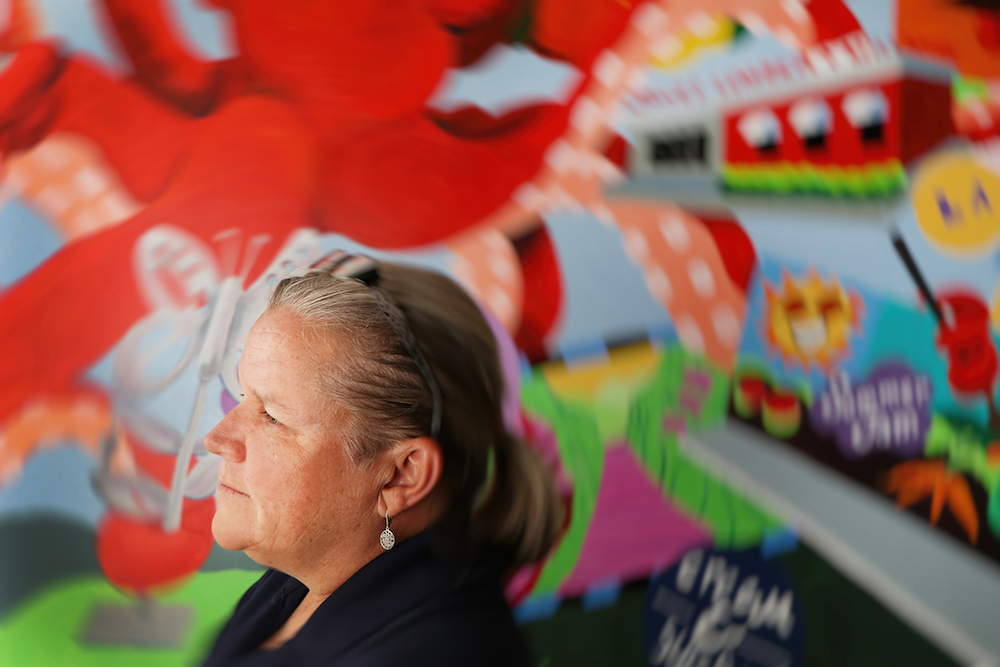 By Katharine Moore, Executive Director of the Jefferson Avenue Center

Sheryl Lazenby is graphic artist, photographer, muralist, illustrator and chalk artist. We chatted with her about her inspirations, her chalk art and her work preserving a portion of a removed Aminah Robinson mural.

Katharine: I’d love to explore three things with you. Let’s start with your sense of identity as an artist. How did that take shape?
Sheryl: My grandfather, Girard Bradshaw, became a regionally-known painter later in life. In his mid-50s, his doctor told him he needed to work less and enjoy life more, so he took up watercolor painting.  He had the good fortune to meet and study with world renown watercolorist John Pike at his studio in Woodstock, New York – where Pike became his mentor and friend.

My grandfather engaged the whole family in his passion for art. Many weekends he would set up a booth at a New England fair to sell his paintings, or he would pack us up to find a handsome barn or a peaceful meadow, for us to spend the day painting. Once, he entered a painting of mine into a juried show, and was a proud grandpa when I won my first blue ribbon at four-and-a-half. I have that painting framed and hanging in my office.

The most valuable gift he gave me was an understanding of what it meant to be an artist and the understanding that one could make a life with art. I can remember riding along with him in the car and being asked, “See that odd tree over there? How would you paint that?” So, I began to develop an eye and a sensibility from very early on. 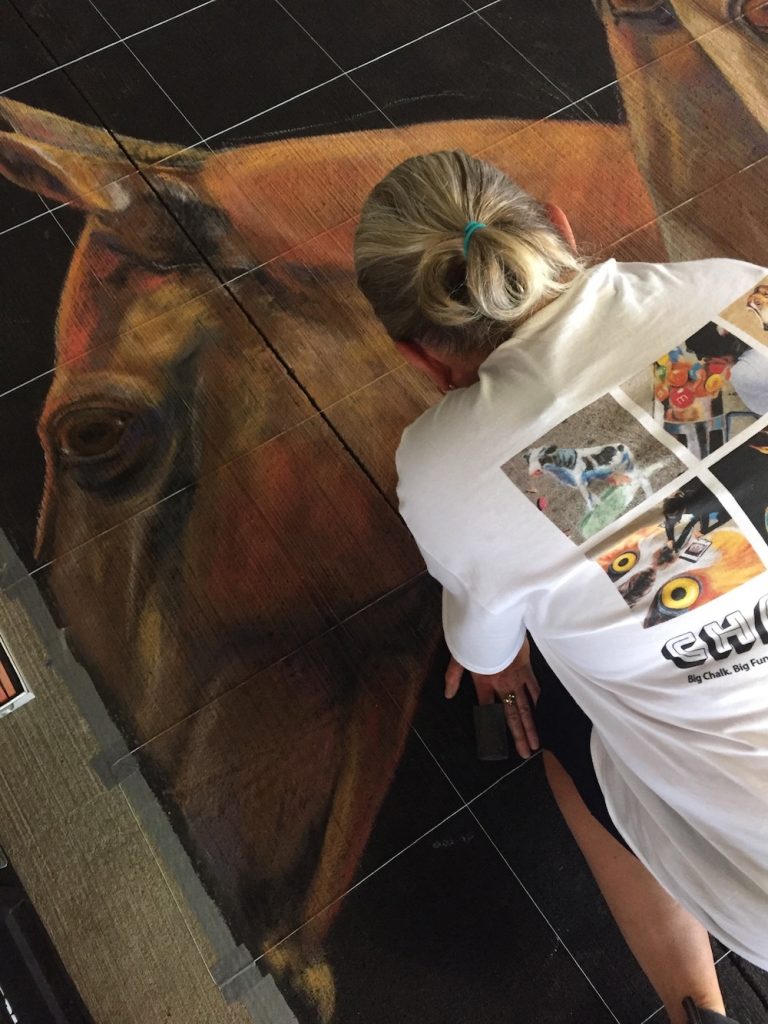 Twenty-six chalk artists from across the US and Mexico were invited to participate in an inaugural chalk festival at the Crystal Bridges Museum of American Art in Bentonville, Arkansas in August 2019. Lazenby works on a panel with three horses. Shown here, the smallest of the three measured 5 feet from ear tip to nose.

Katharine: What came after that first blue ribbon?
Sheryl: I earned a BFA at Miami University and spent many years as a commercial artist, providing graphic design, illustration and photography for a large manufacturing firm – a parent company to five subsidiaries. Happily, I had a thriving freelance business on the side, because one day the company decided to downsize the marketing department to a staff of zero. I have clients in Syracuse, NY at Cornell University, in New York City and in the Caymans, but most are in the central Ohio area. All of my clients are quite different and very interesting!

Katharine: In addition to your work as a freelance graphic designer and photographer, you are a chalk artist. How did that come about?
Sheryl: This is funny – I answered an internet call for artists for Chalk the Block at Easton Town Center. I truly had never heard of chalk art, but I was intrigued by the idea and applied. I figured “what is the worst that could happen?” If I was selected (which I was), I would train myself with online “how to chalk” videos (which turned out not to exist!). There was a fair amount of panic behind creating a 10×10 foot chalk painting in a day, determining how much chalk would be needed and what other tools were required, but the actual event turned out to be a transformational experience.

After years of working alone with a computer, and working alone with a camera, here was an art form that invited interaction from thousands of people passing by. They wanted to chat about the process, and to take pictures and to stop back later to see how things were coming along. I can tell someone that I typically work on a large scale, but until I show photographs of me in relation to my work, they don’t fully appreciate the size of it all. Discovering the keen interest people had for the work was as surprising to me as the satisfaction of the new medium, most had only experienced chalk art as viral emails. I love inspiring future chalk artists to give this a try at home.

Eventually six chalk artist friends and I created the Ohio Chalk Art Guild. COVID-19 has pretty much erased our 2020 season, but in May four members of our group created 4’ x 8’ murals at the OSU Wexner Medical Center to provide inspiration to anxious and exhausted health care workers as they went to work. Our ladders had to be sterilized and each artist had to wear a mask and we worked behind caution tape to protect our workspace, but the appreciation was extraordinary, and my 14-day quarantine afterwards was worth being able to show our healthcare workers how important their work is to all of us. 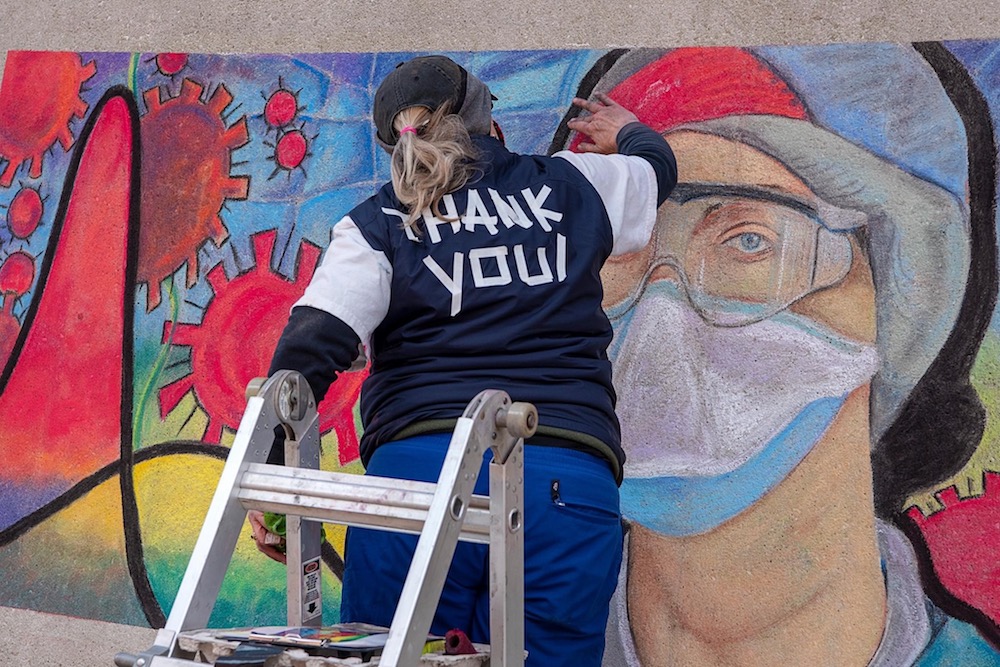 In May, four 4’ x 8’ chalk murals were done on the side of the 12th St. Garage at the OSU Wexner Medical Center to show appreciation to the healthcare workers as they went to work.

Katharine: Finally, let’s talk about the project at the Jefferson Avenue Center.
Sheryl: Sure. You called me a few days after the mural of Aminah Robinson’s “A Street Called Home,” painted by CCAD students, had been torn down as part of a State Auto development plan. You said you had in your possession 10 cinder blocks from the 150’ X 20’ demolished mural, and you asked for my help.

We talked about recreating a portion of the mural on an eight-foot-tall wall but decided a smaller installation would be more inviting for the employees and visitors at the Jefferson Avenue Center. Your colleague built a low wall, utilizing mural blocks that were painted with Robinson’s signature buttons and capped it with a sandstone top that ties into the historic materials found in the Jefferson Historic District.

I have researched the materials used on the original mural, connected with Nova Color, the company that supplied the paint, and am excited to get to work on the project now that the wall has cured.

I admire you guys at the Jefferson Avenue Center for being so tenacious about saving even this small fraction of the CCAD student’s work, and I am very pleased to have been commissioned to restore what was saved, and to fill in where needed, working from the invaluable photographs the Columbus Museum of Art has provided of the original.

I think the residents of central Ohio will smile knowing that a part of this famous local mural will live on at the Jefferson Avenue Center.