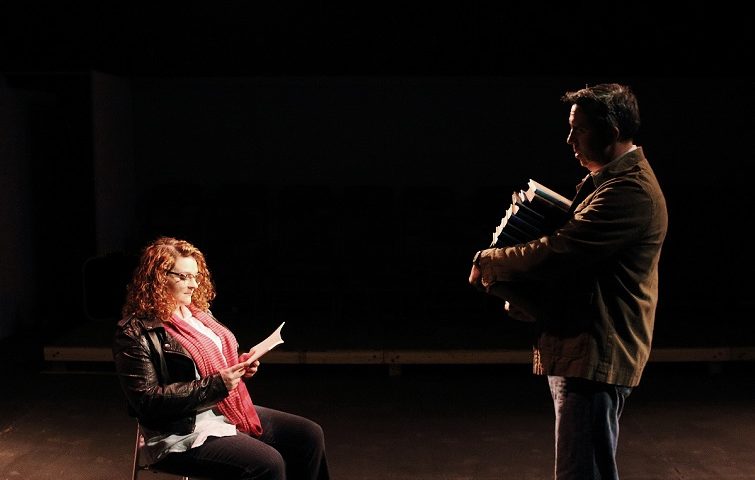 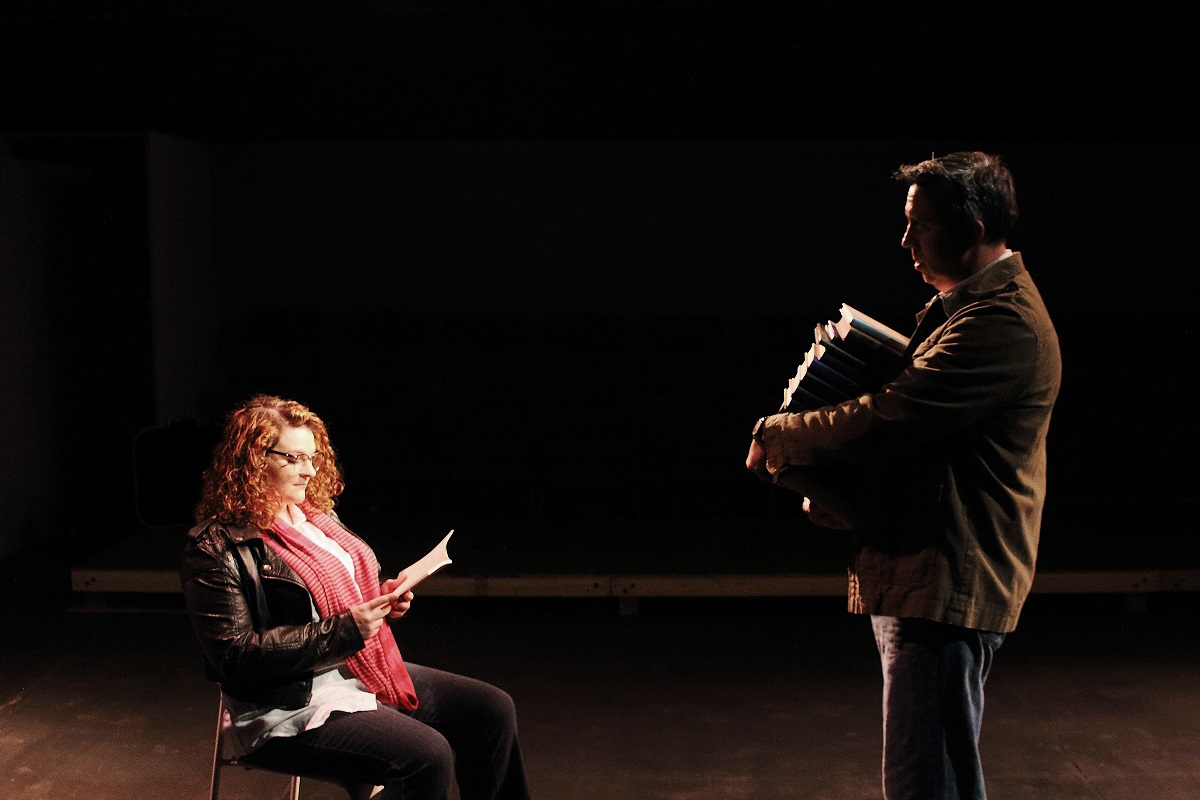 Michelle Weiser and Rick Clark are currently starring in Red Herring Productions’ Jack & Jill, incorporating their own personal experiences and knowledge into their roles. As Jill, Michelle represents many stages of life and relationships. Though challenging, Michelle has been acting since she was 14 years old. Similarly, Rick started acting when he was young as well. Acting requires patience, personality, and dedication, and both Rick and Michelle enjoy improving those qualities. Jack & Jill is showing at the Franklinton Playhouse through June 16.

Are you both from Columbus? What is it about this city that endears you the most?
Rick: I was born in Harrogate, Yorkshire in England and because of my dad’s career with the government and my own nomadic impulses, I have move 36 times. I initially followed “the girl” to Columbus and it was a nice change of pace from the more amped up East Coast vibe.
Michelle: I was born and raised here, so I definitely feel an affinity with my hometown! I enjoy all the benefits of a big city, but I can still get some nature time in.

Tell us about your career paths in acting.
Michelle: I’ve been acting since I was 14, so I’m now at the point where I’m losing track of how many productions I’ve done! I did theatre all through high school, and went to college for acting. Once I graduated I moved back to Columbus and have been doing at least 2-3 theatre productions (and some film) since. My favorite roles include the title role in [Porto], Maria in Ken Ludwig’s A Comedy of Tenors, and Inga in Young Frankenstein.
Rick: I started acting, officially, when my mom dragged me to an audition back in Annapolis, Maryland a long time ago and I haven’t been too removed from it ever since. Highlights include performing with my mom in that first production (Anne of the Thousand Days), a one-man show about John Wilkes Booth–Lincoln’s assassin–(To Bury Caesar), and portraying George Bailey (one of my idols is Jimmy Stewart) in CATCO’s production of It’s A Wonderful Life. I’ve done a bunch of Shakespeare, including adapting and directing Julius Caesar for a predominantly female cast.

Tell us about your current roles in Jack & Jill, by Red Herring Productions:
Rick: This role represents a big challenge and a wonderful opportunity to incorporate a lot of what I’ve absorbed over the years, not only as an actor but also as a person/partner. As many will discover who watch this production, it is littered with “autobiographical” nuggets throughout. If you have had/wanted/lost/pursued a relationship, something in this will stir some recognition.
Michelle: Jill is a woman who we see at many different stages in her life: newly single, married, after she becomes an M.D.! Jill wants to live her life and have relationships, but she wants to maintain her independence and avoid repeating mistakes from her past relationship, which causes friction with Jack.

What type of audience should come to the production of Jack & Jill?
Rick: Anyone who may enjoy a somewhat voyeuristic opportunity to be a fly on the wall as a relationship blossoms, is challenged, disintegrates, haltingly rekindles and finds a sense of balance will want to see this. Again, we’ve all been there and will find something familiar, be that affirming, embarrassing or otherwise.
Michelle: If you’ve ever been in a romantic relationship, this is the play for you. Seriously. Everyone will likely have something to which they relate. Definitely an adult show.

What gets you up in the morning? And what gets you through the workweek?
Michelle: My clients usually get me up! Being accountable to someone who wants to make positive changes in their life is as good a reason as any. I have worked very hard to relish the week rather than get through it, but I always look forward to a glass of wine and a show!
Rick: Sometimes it’s the obligation of what I HAVE to do, but most often it’s the anticipation of whatever quirky twist in the road that I get to or have to navigate that day. I love checking things off of lists and sometimes those are lists to serve others and sometimes those are my own.

What advice or mentors have helped guide you along the way?
Rick: A director once answered a question I had about what to do with my hands during a scene and his answer was simplistically brilliant…nothing. Sometimes things aren’t as complicated as we tend to make them and finding the simplicity can be so rewarding.
Michelle: So many it’s hard to count. An actor I really respect told me, “action begets action,” basically, that if work isn’t coming to you as an artist, make your own!

Explain some of your work-life balance challenges (especially acting while maintaining your day job) and how you achieve success.
Rick: Being in a play, if you are truly invested in the process, can be grueling work. Making the time to be intentional about learning lines and why you’re saying what the playwright has you say; being “present” in rehearsals and helping the director move the play towards hers or his vision; having the patience to do things over and over again but having to have them seem like original moments–these are all things that happen after you have spent a full day at work. On top of that, if you have important people in your life (my daughter and my girlfriend, particularly) making sure you are present for them when needed.
Michelle: Acting while paying the bills is always the challenge, but it’s part of it for everyone. Some things I do for self-care is I do not see clients on one day of the week, and I make sure to make time for my fiancé.

What do you do to unwind?
Michelle: I do yoga, go to the movies, play and listen to music (I’m learning the guitar), and go to concerts or theatre.
Rick: I love to spend time in our backyard, helping my Colleen create our little oasis. I build stuff, she plants stuff. From planting beds, to shelving, to pathways, I definitely find that work peaceful and sustaining. Or getting to the next level in whatever stupid phone app game on which my daughter has insidiously hooked me.

What might someone be surprised to know about you?
Michelle: That I’m secretly an adrenaline junkie. In another life I would be a precision driver for car commercials.
Rick: I’m an introvert by nature. Long explanation, but true.

When you were a kid, what did you say you wanted to be when you grew up?
Michelle: An artist. A singer. An actor.
Rick: I grew up playing soccer and for a long time thought that would be my path.

What books or podcasts are you reading/listening to right now?
Michelle: I’m re-reading Anne Rice’s Vampire Chronicles.
Rick: To be honest, my time is taken up with script, script, script, eat, maybe sleep and then script. But I have been re-reading a book by Loup Durand called Daddy and trying to reconnect with real pages rather than screens.

What would your autobiography be called?
Rick: Silver Spoon and a Paper Plate – inspired by my learned ability to assimilate into any setting, from a sophisticated dinner to a backyard barbecue. Or Move the Air Around You – which arises from my ongoing challenge to myself and those whose lives touch mine to reject the static. You never know what is possible until you move from stagnancy to motion.
Michelle: Miss Impatient.

What are a few of the top places you’d recommend to someone new to or visiting Columbus?
Rick: Our “theatre district” is pretty neat with the Ohio, Palace, Southern, Riffe all within a few blocks (along with the Columbus Commons), with the Lincoln Theatre, King Arts Complex, Red Herring, Schiller Park and others also nearby. I also encourage people to visit the Ohio History Center (a lot more going on there than people realize), Franklin Park Conservatory, Columbus Museum of Art and the “Mile” is a relaxing stretch for ambling.
Michelle: Go see some art! Dance, theatre, music. Check out some smaller venues and see the amazing work local artists are doing. And Fox in the Snow for sweet treats.

Which organizations are you involved with around the community?
Rick: I have volunteered with the Ohio History Connection, Short North Alliance, Local Matters and have memberships with the CMA and Franklin Park Conservatory.
Michelle: I just signed up to volunteer for Women Have Options-Ohio.

What are some local initiatives you are most passionate about?
Rick: I am actually hoping to launch a community initiative in the fall, tied to work the Ohio History Connection is doing and collaborating with girls’ sports teams…stay tuned!
Michelle: Reproductive Justice.

What’s the most exciting thing about Columbus right now?
Rick: With successful initiatives to preserve and revitalize things uniquely Columbus–and I am including the Crew–like the Scioto Mile, Franklinton, plans for the Near East side–provided we are respectful of heritage and inclusive about what is being done, the needle is definitely moving to keep Columbus evolving as a destination.
Michelle: How we have truly “arrived” as a national-level city.

What are three things you wish Columbus had?
Michelle: Affordable housing, wage increases, and effective mass public transit.
Rick: Definitely a more connective transit system (trains to our other major Ohio cities, Chicago, New York, Nashville and Pittsburgh); A collaborative playwrights’ festival, pooling all of the area theatres to host new works; An organization that orchestrates theatre training experiences, again in collaboration with our professional and semi-professional theatres, for our youth.

If someone were to ask you what the “pulse” of Columbus is, what would you tell them?
Michelle: The feeling on the weekend when you know there are thousands of people gathering around sports, art, music, or nature to share some joy.
Rick: Innovators that are expressing that we don’t have to wait for hand-me-down “originality” from either coast. Entrepreneurship is thriving!